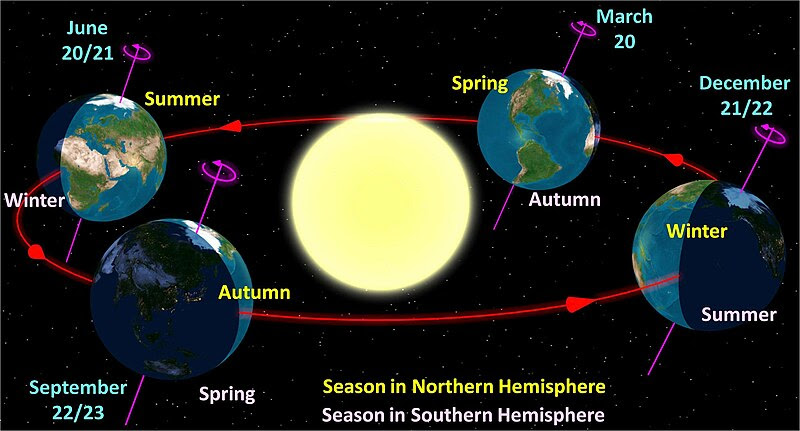 
The moment of the Summer Solstice, heralded as the beginning of the season of Summer in Earth's Northern Hemisphere (and the season of Winter in the Southern Hemisphere), will be early Friday morning, 2013 June 21, at 1:04 a.m. Eastern Daylight Saving Time (EDT) or 5:04 Coordinated Universal Time (UTC). Two days later mark the largest visible Full Moon of 2013.

In etymology, the word solstice comes from the Latin terms sol (Sun) and sistere (to stand still). In ancient times, astronomers/astrologers/priests recognized that on one day of the year (in the Northern Hemisphere, near the day we now call June 21), the Sun would appear to reach its highest point in the sky for the year. The motion of the Sun's apparent path in the sky (what is known astronomically, today, as the Sun's declination) would cease on this day, before reversing direction.
Today, we know that, while the Sun does have motions, it is actually the motion of the Earth, tilted on its axis 23.44 degrees while revolving around the Sun, that causes the Earth's seasons. Hence, as the Earth arrives at the point in its orbit around the Sun, when the north polar axis is most directly inclined toward the Sun, marks the Summer Solstice in the Northern Hemisphere.

This year, just a couple days after the Summer Solstice, we will observe the largest Full Moon in 2013. Although some media are referring to this as a "Super Moon," it is not really that unusual and occurs every few years when conditions are favorable.

This year on June 23, the Moon will be at perigee (closest approach to Earth for the month) at 7:00 a.m. EDT (11:00 UTC). For coastal areas, tides are expected to be higher than normal.