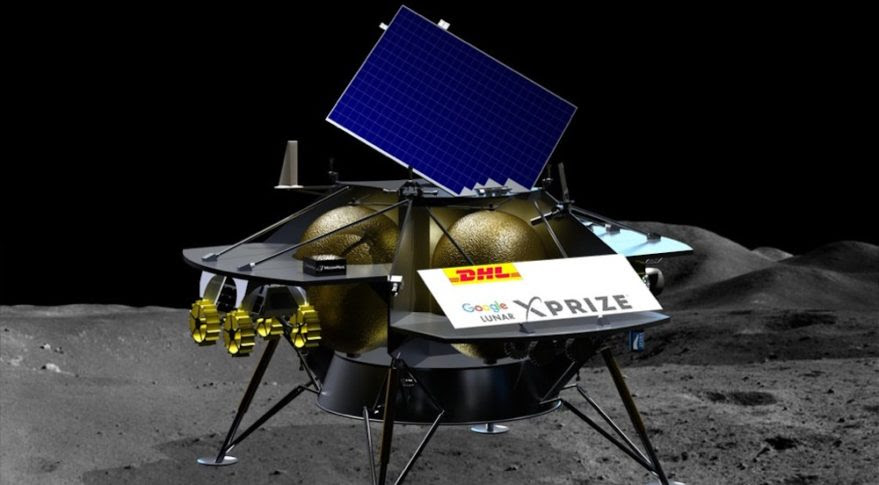 NASA's newest space probe to Mars launched this-past weekend from California, the first U.S. interplanetary launch from outside of Cape Canaveral, Florida. Aimed particularly to seek-out “Mars-Quakes,” this mission is scheduled to land on the Red Planet at the end of the Thanksgiving Weekend.

Called “InSight” (Interior Exploration using Seismic Investigations, Geodesy and Heat Transport), this probe will be a lander, not a rover. So, it will stay in one place to better study the interior of Mars, which is its primary mission. It is hoped that “Insight” will help provide insight into how all of the rocky planets in the Inner Solar System, and the Earth's Moon, were formed 4.6 billion years ago.

Despite thick fog before sunrise, which made it difficult for people to watch the launch, InSight was launched, atop a United Launch Alliance Atlas V rocket, from Vandenberg Air Force Base Saturday morning (2018 May 5) at 4:05 a.m. Pacific Daylight Saving Time (PDT) in California [7:05 a.m. Eastern Daylight Saving Time (EDT) / 11:05 Coordinated Universal Time (UTC)]. The West Coast launch site had less of a back-log of launches then did Cape Canaveral. InSight is expected to land on Mars on Monday Afternoon, November 26, around 3:00 p.m. Eastern Standard Time (EST) / 20:00 UTC.

The launch was timed to allow InSight to travel when Mars and Earth are closest, something that only happens once every two years. InSight will fly 301 million miles / 485 million kilometers to reach Mars. The primary mission of InSight is expected to last one Martian year, about the same as two Earth years.

InSight will land in an area of Mars known as Elysium Planitia, not far north of the Gale Crater where NASA's Curiosity Rover (the last NASA mission to Mars in 2012) is still exploring. The landing site is also just north of a boundary between the older, cratered southern highlands and Mars' northern lowland plains.

Seismology, which has previously been studied on Earth and on Earth's Moon, is now to be studied on Mars. The primary purpose of the InSight mission is to better understand the Martian interior, particularly whether the planet's core has solid and / or liquid components similar to Earth's core (Earth's core is composed of a solid inner core and a liquid outer core).

Seismographs were included on the first American spacecraft to land on Mars, the two Viking probes which landed in July of 1976. However, these seismographs were mounted on the spacecrafts, and the results did not measure Mars-Quakes, only the Martian wind buffeting the two space probes.

The Seismic Experiment for Interior Structure (SEIS) will be placed directly onto the surface to record any specific shaking of the planet. It is expected that faint seismic signals will simply record meteorite impacts, which could help determine the composition of the interior structure of Mars. Stronger tremors, or Mars-Quakes, would be evidence that the planet is geologically active.

Another important experiment on InSight is the Heat Flow and Physical Properties Package instrument, which will seek heat coming from Mars' core. Nicknamed “the mole,” this "self-hammering nail" will burrow itself up to 16 feet / 5 meters below the Martian surface to sense heat.

A corner-cube retro-reflector, called the Laser Retro-Reflector for InSight (LaRRI) instrument has been installed on the top deck of the NASA InSight Mars Lander, for laser range-finding by Mars orbiters. Provided by the Italian Space Agency, this is a passive instrument that can still be used once the InSight Lander is retired. It could also form a node as part of a future Mars geophysical network.

Other experiments on InSight include the Rotation and Interior Structure Experiment (RISE), which will use InSight's X-band radio to provide a more precise measurement of Mars' rate of rotation and whether the rotation has a wobble. Weather at the landing site will be monitored by the Temperature and Winds for InSight (TWINS) instrument. And, two color television cameras (one which will provide stereoscopic views of Mars) are mounted on the Lander.

Two silicon wafers, etched with the names of 2.4 million public supporters of the InSight mission, are being sent to Mars with the InSight Lander. This was part of a public outreach program set-up by NASA, to allow members of the public to be a part of the project. Each letter, etched by an electron beam, measures only 1/1000 the width of a human hair, while each of the two silicon wafers measures 0.3 inch / 8 millimeters in diameter.

In addition to InSight, the Atlas V rocket launched two independent, miniature communications satellites, known as Cube-Sats, toward Mars. Each Cube-Sat is modular, about the size of a briefcase. These are the first two Cube-Sats bound for Deep-Space.

The mission of Mars Cube One (both A and B), the two MarCO Cube-Sats, is to follow the Insight Lander to Mars, while the two Cube-Sats go into orbit around the Red Planet. Mars Cube One will test miniature spacecraft technology, particularly communications technology, in the Deep-Space environment. The Cube-Sats will particularly be watching the three-legged InSight as it enters the Martian atmosphere and lands on the surface via parachute and engine firings, the infamous 'Seven Minutes of Terror.' 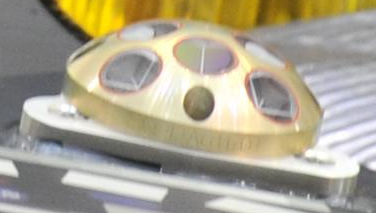 Source: Glenn A. Walsh Reporting for SpaceWatchtower, a project of Friends of the Zeiss.
2018 May 7. 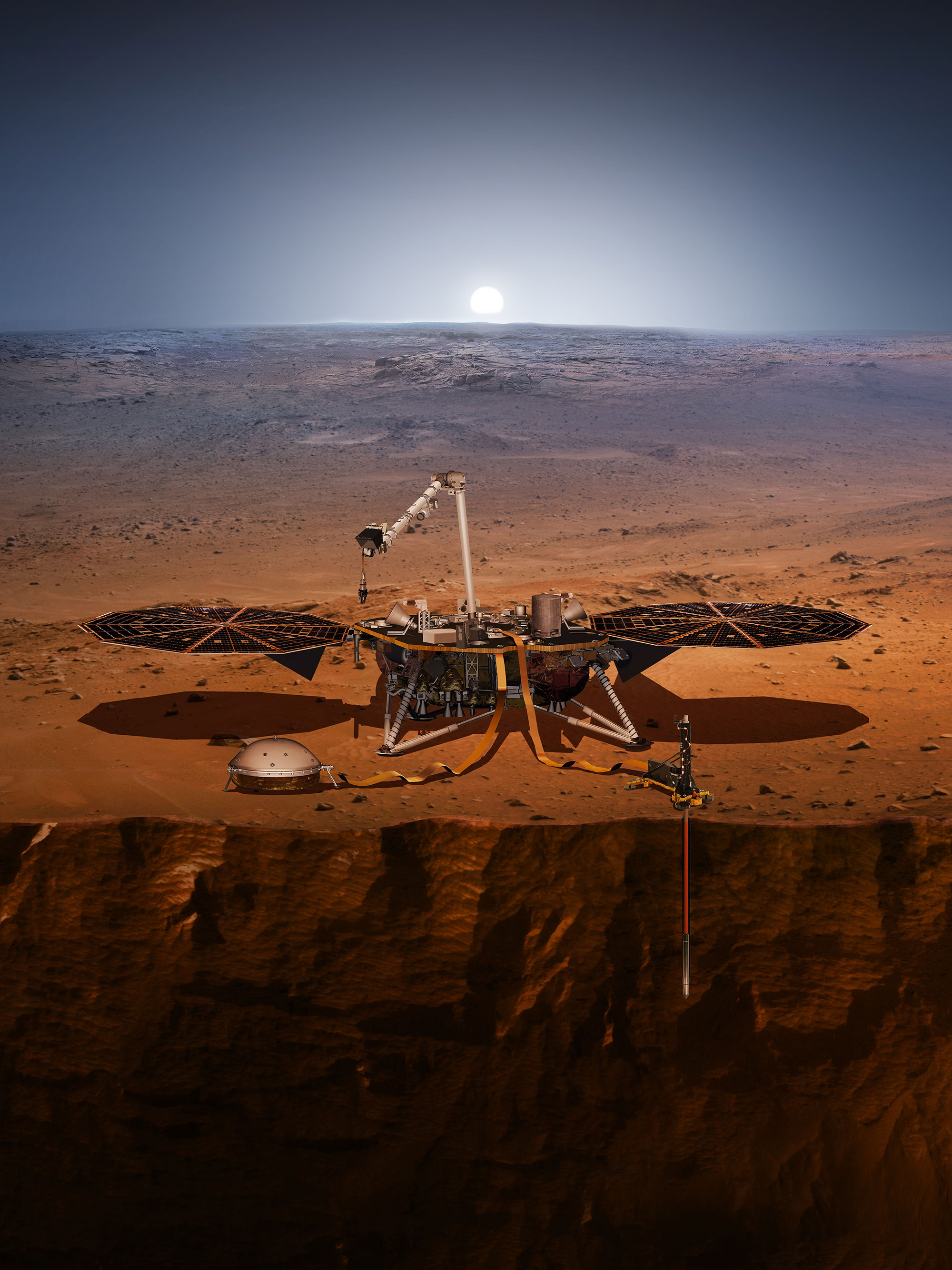 Astronomical Calendar for 2018 May ---
Link >>> http://buhlplanetarium4.tripod.com/astrocalendar/2018.html#may