This map shows the path of the Eclipse along with the Path of Totality for the Great American Solar Eclipse on August 21. While a Partial Eclipse of the Sun will be observable over all 48 states, only in the narrow band (approximately 70.8 miles / 114 kilometers in width) will a Total Solar Eclipse be seen. Only in this narrow area can photographs of the two-minute total eclipse phase be included in the Eclipse Mega-Movie. (Map Source: NASA, Courtesy of A.T. Sinclair)

August 21 will be a special day in the United States, as the Great American Solar Eclipse will cross the entire country, from Oregon to South Carolina. Citizen Scientists (that is, all non-professionals interested in science who wish to assist scientists), who take photographs from inside the Eclipse path of totality, have the opportunity to help scientists learn more about the Solar Corona by submitting their Eclipse photos to the Eclipse Mega-Movie 2017 Project.

This is a unique opportunity for Citizen Scientists to help gather data on a part of the Sun that is rarely seen. The last time a Total Solar Eclipse crossed the United States was 99 years ago—on 1918 June 8. On that date, the Eclipse path of totality moved from Washington State across the country to Florida.

This is also the first time that Solar Eclipse totality has reached the continental United States since 1979 February 26. However, a Total Solar Eclipse did reach Hawaii on 1991 July 11. Most of the continental United States saw a Partial Eclipse of the Sun that day in 1991 (that was the last Solar Eclipse observed by the general public, using the historic 10-inch Siderostat-Type Refractor Telescope, at Pittsburgh's original Buhl Planetarium and Institute of Popular Science).

The Solar Corona is an aura of plasma, the outer atmosphere, that surrounds the Sun and other stars, and extends millions of miles or kilometers into space from the Sun. During a Total Eclipse of the Sun, or Total Solar Eclipse, such as the Great American Solar Eclipse that will occur on August 21, the Solar Corona can be seen, safely, with the unaided eye—BUT ONLY in the narrow path of totality (with a width on August 21 of approximately 70.8 statute miles / 114 kilometers) and during the very short period of the total phase of the Eclipse (in most cases on August 21, a little over two minutes), when the rest of the Sun is completely blocked by the Moon. At all other times it is extremely dangerous to a person's eye-sight to look at the Sun without proper equipment and proper training to do so safely.

Since it is very difficult to study the Solar Corona, except during a Total Solar Eclipse, scientists want to take full advantage of the long stretch of time the Eclipse will be observed in the United States next month, due to the great length of the Eclipse path of totality across the country. The Eclipse Mega-Movie 2017 Project hopes to gather photographs during the totality stage of the Eclipse from more than a thousand photographers and astronomers, from coast-to-coast.

Approximately 1,500 trained, volunteer observers will be photographing the Eclipse, from sites along the path of totality, using digital, single-lens reflex cameras and specially prepared telescopes. The photographs from these observers will provide the high-quality mega-movie, that should be available to be viewed by the public later this year.

A lower-quality mega-movie will be produced by the photographs submitted by people using a regular camera or cell-phone camera. Although not as high-quality, this mega-movie should be available for public release much sooner.

Anyone can use a free-of-charge Eclipse Mega-Movie Mobile App to participate in this 2017 Project. This smart-phone app can be obtained, now, at the Google Play Store (Internet link to this mobile app at the end of this blog-post); an iOS app will soon also be available.

In both cases, all photographs submitted will be stitched together to form a motion picture showing the Eclipse as it traveled across the country from the Pacific Coast to the Atlantic Coast. From these two mega-movies, scientists hope to learn more about the Solar Corona, possibly including its relationship with the Sun's Chromosphere, and how it changes over time. When completed, both mega-movies are expected to run approximately 90 minutes.

Remember, the whole idea is to obtain images of the Great American Solar Eclipse during the totality phase. Only photographs taken within the Eclipse path of totality, and during the total phase of the Eclipse (when the Moon completely blocks-out the solar disk), can be submitted for inclusion in the Eclipse Mega-Movie. It would be more dangerous to eye-sight to try to photograph any of the partial phases of this Eclipse, and photographs of the partial Eclipse phases cannot contribute to the Eclipse Mega-Movie 2017 Project!

The Eclipse Mega-Movie 2017 Project is sponsored by Google's Making and Science Initiative and the University of California at Berkeley's Space Science Laboratory, along with several other partners including the Astronomical Society of the Pacific and Lick Observatory. The 2017 Project is led by Scott McIntosh from the National Center for Atmospheric Research's High Altitude Observatory and Hugh Hudson from the University of California at Berkeley.

After 2017, the next major Total Eclipse of the Sun to travel in the continental United States will run from Texas to Maine on 2024 April 8. Plans are already being made for a 2024 Eclipse Mega-Movie Project.


Source: Glenn A. Walsh Reporting for SpaceWatchtower, a project of Friends of the Zeiss.
2017 July 24.

A major Sunspot (AR2665) turns toward the Earth on July 13, after the Sun was spotless for two days. A powerful Solar Flare is now headed towards Earth, which will cause an atmospheric geomagnetic storm this weekend.
(Image Sources: NASA Goddard Spaceflight Center / NASA Solar Dynamics Observatory Satellite; Producer: Joy Ng)

After turning towards the Earth in the last few days, large Sunspot AR2665 emitted a large solar flare late on Thursday (July 13). This is despite the fact that the Sun continues getting quieter as it approaches Solar Minimum, the nadir expected around 2019-2020.

This solar blast was observed by ultraviolet telescopes aboard NASA's Solar Dynamics Observatory satellite in Earth orbit. The explosion lasted for more than two hours. It resulted in sustained X-Rays and energetic protons, emitted from the Sun, ionizing the upper layers of Earth's atmosphere. Consequently, there were short-wave radio blackouts over the Pacific Ocean, and particularly in the Arctic region. The explosion also produced a bright coronal mass ejection (CME) that appears headed for Earth.

The National Oceanic and Atmospheric Administration (NOAA), after evaluating late Thursday evening's (July 13, 10:09 p.m. EDT / July 14, 2:09 UTC) solar flare (M2-class) and CME, has issued a geomagnetic storm watch for July 16 and 17. Storms on both days are expected to be a moderately strong Category G2.

Aurora activity is also expected in the far northern and far southern latitudes, at around the same time. Aurora are natural light displays, visible at night mostly in the Arctic and Antarctic regions, caused when charged particles from the solar wind hit the Earth's magnetosphere.

A geomagnetic storm is a disturbance in the portions of the Earth's upper atmosphere known as the magnetosphere and the ionosphere caused by a magnified solar wind of charged particles from the Sun. During a geomagnetic storm, energy from the Sun provides additional energy to Earth's magnetosphere, enlarging the magnetosphere. This often provides additional drag on satellites and space junk in low Earth orbit, limiting the amount of time the satellite and / or space junk stays in orbit.

A coronal mass ejection or CME is an unusually large ejection of plasma and magnetic field from the solar corona. The solar corona is an aura of plasma that surrounds the Sun and other stars, and extends millions of miles or kilometers into space from the Sun. During a Total Eclipse of the Sun, or Total Solar Eclipse, such as the Great American Solar Eclipse that will occur on August 21, the solar corona can be seen, safely, with the unaided eye—BUT ONLY in the narrow path of totality and during the very short period of the total phase of the eclipse, when the rest of the Sun is completely blocked by the Moon; at all other times it is extremely dangerous to a person's eye-sight to look at the Sun without proper equipment and proper training to do so safely.

This week's major solar activity is in sharp contrast to the waning days of this particular 11-year Sunspot Cycle, when visible sunspots have been few. Before Sunspot AR2665 rotated into view, the portion of the Sun facing the Earth went for two full days with no sunspots.

Although sunspots and other solar activity subside during the Solar Minimum, another solar phenomenon can be observed during this time period. Coronal holes often open-up at this time, allowing the Sun's magnetic field to emit streams of solar particles as a fast solar wind.

During Solar Minimum, Galactic cosmic rays, high energy particles from very distant supernova and other high-energy explosions, increasingly reach Earth's upper atmosphere. With a weakened solar magnetic field, there is less natural shielding from such cosmic rays for the Earth's upper atmosphere, which can adversely affect our astronauts in space.


Source: Glenn A. Walsh Reporting for SpaceWatchtower, a project of Friends of the Zeiss.
2017 July 15. 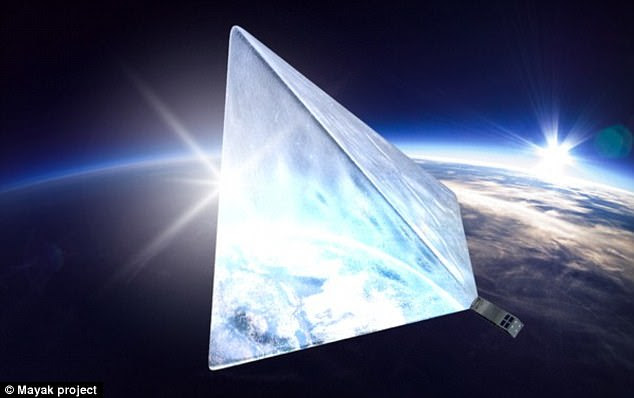 The launch of a Russian crowd-funded satellite, called Mayak, is expected on July 14. The purpose of the small, but very bright, satellite is to test how to brake satellites and de-orbit such satellites. However, astronomers are complaining that this satellite will contribute to light pollution in the night sky, as it is expected to be as bright as the third or fourth brightest object in the sky.
More info: Link >>> http://nypost.com/2017/06/30/russian-satellite-to-be-one-of-the-brightest-objects-in-the-night-sky/ (Image Source: Mayak Project)