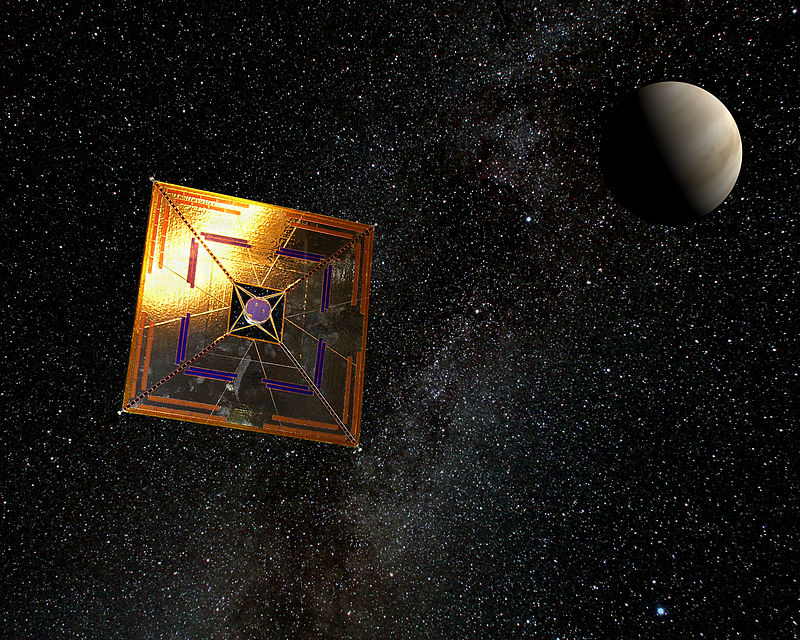 Solar sails which could propel spacecraft to other planets, or possibly even to distant stars, have been a dream of scientists since the 19th century. A light-sail design would accelerate a spacecraft slowly, but it would speed-up to high speeds over a longer period of time.

Particularly for possible interstellar travel, our current use of rockets with chemical propellants would not be efficient or effective. And, a large part of the thrust has to be used just to transport the heavy fuel needed for later in the mission.

Originally conceived to take advantage of the solar wind of our Sun (and, perhaps, that of other stars), today light-sail spacecraft are more likely to use strong ground-based (and, perhaps, some day space-based) lasers for such spacecraft propulsion.

However, when using a ground-based laser, one potential problem has been to keep the laser-sail spacecraft from straying away from the laser beam and veering off-course. Optical scientists from the Chester F. Carlson Center for Imaging Science at the Rochester Institute of Technology and the BEAM Engineering for Advanced Measurements are experimenting with solutions to this problem.

While previous light-sail designs simply acted like mirrors to reflect the laser-light back to the source, the new design uses liquid crystals in diffraction gratings to better stabilize the spacecraft. If the spacecraft starts drifting toward the left, the new sail deflects light to the right and visa-versa. Hence, the spacecraft is forced to position itself back to where the laser beam falls on the center of the sail.

Today, diffraction gratings are used to help encode music and other information on compact disks and digital video disks. One of the effects of diffraction, which some people may be familiar with, is the rainbow effect seen when light is reflected from a CD or DVD.

The original experiment, which was successful, simply used diffraction gratings on the left and right sides of the sail. Now, the researchers are beginning experiments to test diffraction gratings that could center a spacecraft, no-matter which direction it drifts (not just to the right or to the left). They hope that future experiments could be conducted in Earth orbit, on the International Space Station or a separate satellite.

This research was published by researchers Ying-Ju Lucy Chu, Nelson V. Tabiryan, and Grover A. Swartzlander, Jr. in the 2019 December 13 issue of the journal Physical Review Letters.

In 2016, Breakthrough Starshot Initiative announced a plan to launch swarms of micro-chip-sized spacecraft toward the Alpha Centauri star system, the closest multi-star system to the Earth. Proposed to cost up to $100 million, the very small spacecraft would include thin, reflective, and very light-weight laser-light sails, propelled by incredibly powerful lasers based on Earth. The project proponents hope each spacecraft could reach speeds close to 20 per-cent of the speed of light, reaching the Alpha Centauri system 20 years after launch.


Source: Glenn A. Walsh Reporting for SpaceWatchtower, a project of Friends of the Zeiss.
Monday, 2020 January 27. 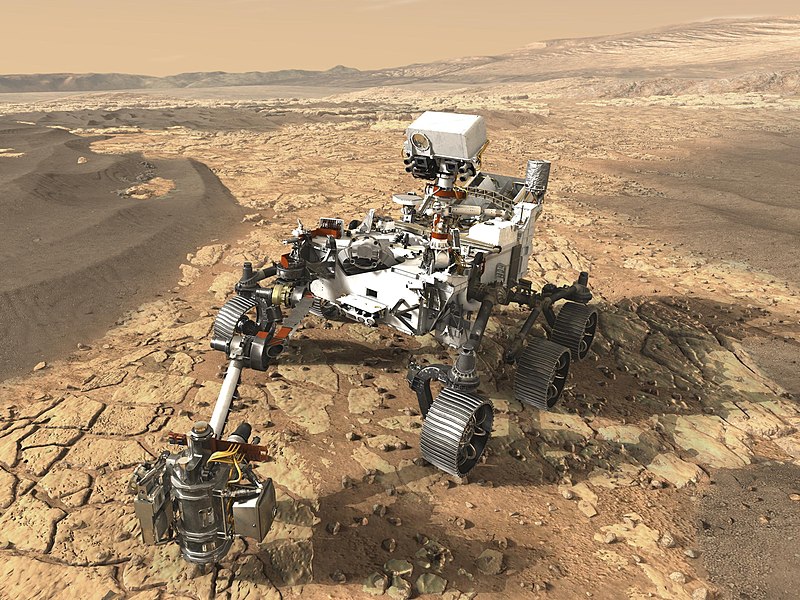 In October, SpaceWatchtower publicized the NASA naming contest, for American students, for the Mars 2020 Rover, scheduled to launch to the Red Planet this Summer. Well, the finalists have been announced, and now the public is invited to vote for your favorite name, from the final candidates.

While the naming contest was limited to students in any school (Kindergarten through Grade 12, including home school students) in the United States, anyone in the world can vote in the public poll for their favorite name on-line, for the Mars 2020 Rover. The deadline for voting is Monday, 2020 January 27 at 11:59 p.m. Eastern Standard Time (EST) / January 28, 4:59 Coordinated Universal Time (UTC). The results of the poll will be a consideration in the final naming selection.

Vote in the Public Poll at this Internet link:
Link >>> https://mars.nasa.gov/mars2020/participate/name-the-rover/

More than 28,000 student essays were submitted after the contest began on August 28 of last year; the students were required to write an essay explaining their choice of rover name. A diverse panel of nearly 4,700 judge volunteers, composed of educators, professionals, and space enthusiasts from all around the country, narrowed the pool down to 155 deserving semi-finalists from every state and territory in the country.

"Thousands of students have shared their ideas for a name that will do our rover and the team proud," said Lori Glaze, director of NASA's Planetary Science Division in Washington. "Thousands more volunteered time to be part of the judging process. Now it is the public's opportunity to become involved and express their excitement for their favorites of the final nine."


At the conclusion of the public poll, the nine student finalists will discuss the proposed rover names with a NASA panel which includes Lori Glaze, Director of NASA's Planetary Science Division in Washington, NASA Astronaut Jessica Watkins, NASA / Jet Propulsion Laboratory Rover Driver Nick Wiltsie, and Clara Ma, who earned the honor of naming the Mars Rover Curiosity as a sixth-grade student in 2009.

The contest will finish-up in March, when the winning name will be announced, along with the student who proposed the name. The winning student will receive an invitation to watch the launch of the Mars 2020 Rover in July or August from the Cape Canaveral Air Force Station in Florida.

NASA calls the Mars 2020 Rover a “robotic scientist,” which weights more than 2,300 pounds / 1,000 kilograms. This robotic scientist will search for signs of past microbial life, characterize the planet's climate and geology, collect samples for future return to Earth, and pave the way for human exploration of the Red Planet. After the launch in July or August, the Mars 2020 Rover is scheduled to land in Mars' Jezero Crater on 2021 February 18.


Source: Glenn A. Walsh Reporting for SpaceWatchtower, a project of Friends of the Zeiss.
Thursday, 2020 January 23. 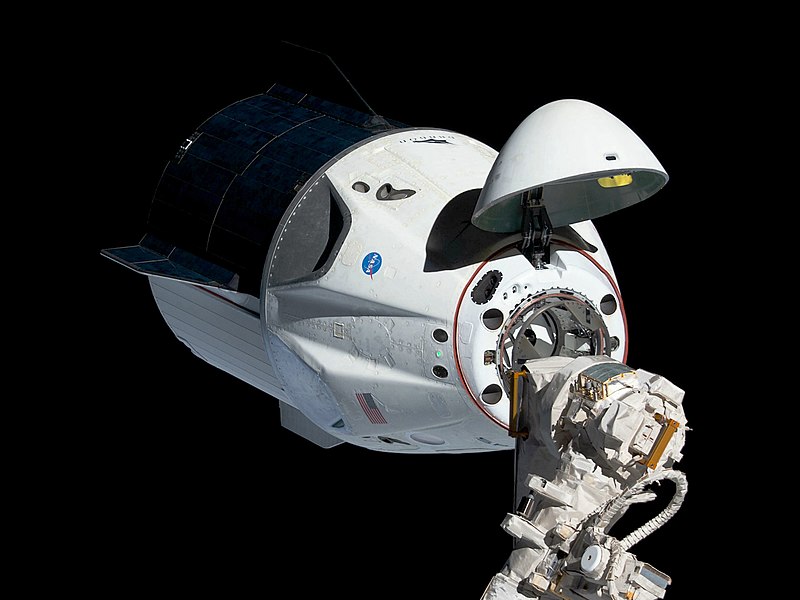 SpaceX Crew Dragon spacecraft, which is scheduled to undergo a critical In-Flight Abort test flight on January 11. This uncrewed test flight, which will launch from the Cape Canaveral Air Force Station in Florida, will test a vital safety system to protect astronauts during an emergency soon after a launch. After the test, the spacecraft will splash-down in the Atlantic Ocean. "The demonstration of Crew Dragon's launch escape system is part of NASA's Commercial Crew Program and is one of the final major tests for the company before NASA astronauts will fly aboard the spacecraft," NASA officials wrote.
More information on the In-Flight Abort test flight:
Link >>> https://www.space.com/spacex-crew-dragon-in-flight-abort-launch-new-date.html
More on the SpaceX Crew Dragon spacecraft:
Link >>> https://en.wikipedia.org/wiki/Dragon_2
(Image Sources: NASA, SpaceX, Wikipedia.org, By Unknown - NASA (direct url), Public Domain, https://commons.wikimedia.org/w/index.php?curid=77702696)