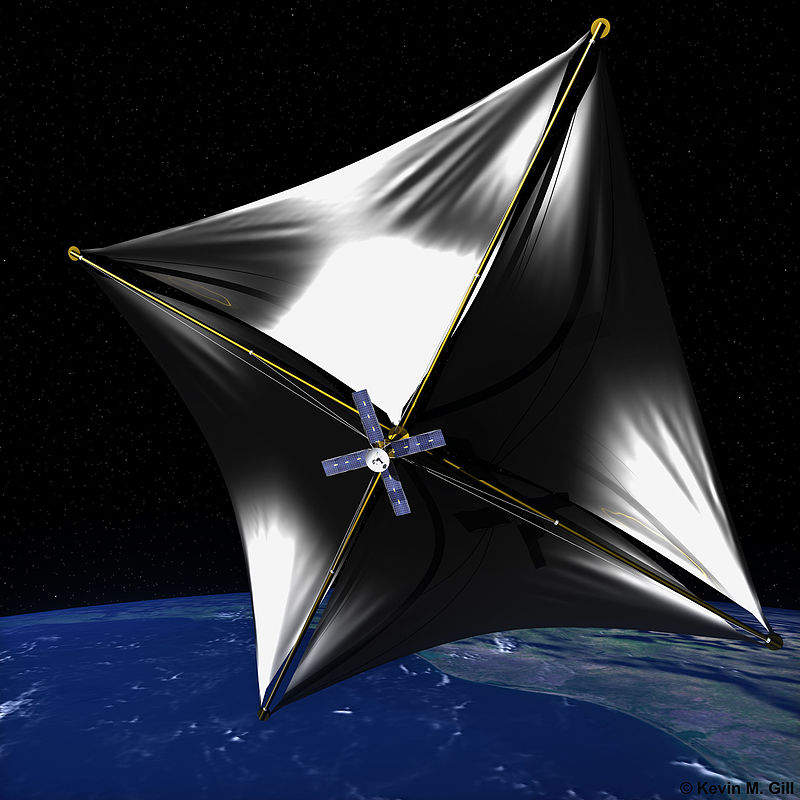 One possible concept for a Laser-sail mounted on a nano-space probe, which could reach
the Alpha Centauri star system, possibly as early as mid-century.
(Image Sources: Wikipedia.org , By Kevin Gill from Nashua, NH, United States - Solar Sail, CC BY-SA 2.0, https://commons.wikimedia.org/w/index.php?curid=42599221 )

Last month, SpaceWatchtower talked about Lasers in Space ? (posted November 13; reference Internet link near the end of this blog-post). Today, SpaceWatchtower looks at a very ambitious proposal to use Lasers for space propulsion, for very small space probes to reach nearby star systems.

Breakthrough Initiatives was launched “in 2015 by Yuri and Julia Milner to explore the Universe, seek scientific evidence of life beyond Earth, and encourage public debate from a planetary perspective,” according to the Breakthrough Initiatives Internet web-site. A Russian entrepreneur, venture capitalist, and physicist, Yuri Milner has invested several hundred million dollars into these projects.

Pete Worden, former University of Arizona Astronomy Professor, NASA Ames Research Center Director, and Brig. General of the United State Air Force, was introduced as the new Breakthrough Prize Foundation Chairman (and Executive Director of Breakthrough Initiatives and Breakthrough Starshot) at a news conference held at the Royal Society in London when Breakthrough Initiatives was announced on 2015 July 20 (46th anniversary of the U.S. Apollo 11 mission, which included the first persons to land and walk on the Moon). Almost a year later on 2016 April 12 (the 55th anniversary of the Russian Vostock 1 mission, which included the first person to enter Outer Space and orbit the Earth, and the 35th anniversary of the first launch of the U.S. Space Shuttle), the Breakthrough Starshot project was announced at an event in New York City.

Breakthrough Starshot is a research and engineering project which envisions sending nano-space probes, called “StarChips,” to nearby star systems. In addition to a much closer look at nearby stars, a major objective of such a mission would be to fly past, and possibly photograph, any Earth-like worlds that may exist in the star system.

Each StarChip would be a very small, centimeter-sized vehicle weighing only a few grams. From a “mother-ship” in Earth orbit, 1000 of these StarChips would be launched toward the target star system.

Propulsion of these spacecraft by Laser-sail will not be easy or inexpensive. Hence, the necessity to have all on-board equipment miniaturized and engineered to survive the rigors of high-speed interstellar travel.

A Laser with a gigawatt of power (approximating the output of a large nuclear power plant) would be necessary to power 1000 such space probes during a single deployment. And, atmospheric turbulence would add difficulty to focusing Laser-light onto the Laser-sails.

In the literature I read regarding this project, there was no mention of whether a Laser in Earth orbit could solve the atmospheric turbulence problem. Of course, some national governments may be concerned with having such a strong Laser in Earth orbit, assuming the technical problems with such an installation could be overcome.

The Alpha Centauri trinary star system, being the closest star system to Earth, is the logical first target of such spacecraft. The 1960s science-fiction television series, “Lost in Space,” portrayed a crewed U.S. space mission launched in 1997 with the goal of being the first such Earth mission to reach a habitable planet outside of our Solar System, one orbiting Alpha Centauri.

At the beginning of this year, Breakthrough Initiatives entered into an agreement with the European Southern Observatory to provide funding for upgrades to the Observatory's Very Large Telescope (VLT) in Chile. It is hoped that such upgrades will help find additional planets in the Alpha Centauri star system. Due to its location in the sky, which prevents most of Earth's Northern Hemisphere viewers from directly seeing it, Alpha Centauri can best be studied by observatories in the Southern Hemisphere.

The StarChip nano-spacecraft would be propelled by Lasers toward the Alpha Centauri star system at speeds of between 15 per-cent and 20 per-cent of the Speed of Light (Speed of Light: 186,282 statute miles per second / 299,792 kilometers per second). At that speed, each StarChip would take between 20 and 30 years to reach Alpha Centauri.

Once a successful mission to Alpha Centauri is completed, technology may advance far enough to attempt to send StarChips to even farther star systems. With currently conceived StarChips technology, star systems that may be within reach of such an effort would include ---

Other possible uses for StarChips include ---

Yuri Milner has provided Breakthrough Starshot an initial funding of $100 million for research into how to engineer such an ambitious proposal. He currently estimates that the entire Breakthrough Starshot project may cost between $5 and $10 billion. He believes the first StarChips could launch as early as the year 2036.


Source: Glenn A. Walsh Reporting for SpaceWatchtower, a project of Friends of the Zeiss.
2017 December 7.