Two Dim Comets May Be Visible in a Telescope

Radar image of the "Green" Comet 45P / Honda-Mrkos-Pajdušáková on
2017 February 12, by the huge Arecibo Radio Telescope in Puerto Rico. This
display combines 13 images of the comet received over two hours. This is only
the seventh comet to come close enough to be imaged by radar. On 2011 August
19 and 20, it became only the fifteenth comet to be detected by a ground radar
telescope.
(Image Sources: Arecibo Observatory, NASA, National Science Foundation, Sky and Telescope
Magazine )

At the present time, two dim comets may be visible in a telescope (and, possibly binoculars), if you know where to look. While the “Green” Comet was in the early morning sky earlier this month, now both the Green Comet and Encke's Comet are in the evening sky.

The first one, nick-named the “Green” Comet due to its coloration, is actually Comet 45P / Honda-Mrkos-Pajdušáková. This comet passed closest to the Earth on February 11. At that time it was 7.4 million miles / 12 million kilometers from Earth. This distance can also be expressed as 0.08 Astronomical Units (1 A.U. or Astronomical Unit is the mean distance between the Sun and the Earth) and 30 times the mean distance between the Earth and the Moon.

At this distance, the Green Comet cannot be seen with the naked-eye; the astronomical Visual Magnitude at its closest point to Earth was expected to be around +6.5 to +7, but in reality it never was brighter than +8. It might be seen with strong binoculars, but a telescope is best for trying to find this comet. Unlike stars which shine their own light and appear as pin-points of light in the sky, comets only reflect sunlight. Hence, they appear as diffuse, fuzzy objects, which make them even more difficult to find.

The Green Comet may still be visible until the end of February. However, it will be a challenge to find. You will need a dark sky, away from city lights. Until a few days ago, this was even more complicated as the Moon was in the early morning sky. But, now the comet is rising in the late evening sky as the Moon rises even later. However, as the end of February gets closer, the comet will be fading in brightness.

The best time to view this comet is around 10:00 to 11:00 p.m. local time. As the comet fades, it will be moving through the constellations Corona Borealis, Boötes, Canes Venatici, Ursa Major and into Leo the Lion. Internet links to additional news articles, which include star charts to help find the comet, are located at the end of this blog-post.

The Green Comet was discovered on 1948 December 3 by Japanese astronomer Minoru Honda. It is named for Minoru Honda, Czech astronomer Antonin Mrkos, and Slovak astronomer Ludmila Pajdusakova. The comet appears green because it emits diatomic carbon, which glows green in the near-vacuum of Outer Space.

This apparition of the Green Comet is the second-closest to Earth between the years 1900 and 2043. The comet's closest approach to Earth came in August of 2011, when it came as close as 0.06 A.U or 5.6 million miles / 9.01233 million kilometers. While this comet comes toward the Sun fairly often (it is a short-period comet with an elliptical orbit of 5.25 years), the next time it is bright from Earth's vantage-point will be in October of 2032 when it is expected to reach a Visual Magnitude of +7.

Enke's Comet is currently visible in the western sky about 90 minutes after local sunset. It is to the left of the Great Square of Pegasus, near the planets Mars and Venus. At the end of this blog-post is an Internet link to pages that show a map of how to find Comet Encke.

Encke's Comet was discovered in 1786 by French astronomer and surveyor Pierre Mechain. However, it was not immediately recognized to be a comet. It was not understood to be a periodic comet until 1819, when its orbit was calculated by German astronomer Johann Franz Encke.

Encke's Comet has the shortest orbital period, 3.3 years, of any reasonably bright comet. A fainter comet, 311P / PANSTARRS, has an orbital period of 3.2 years.

In 1978, Slovak astronomer Lubor Kresak proposed that a fragment of Comet Encke may be the cometary body that caused the 1908 Tunguska Event. On the morning of 1908 June 30, a huge explosion occurred over a sparsely-settled area of Siberia in Russia known as the Stony Tunguska River Valley, which flattened 1,200 square-miles / 2,000 square-kilometers of forest, but caused no human casualties. The cause of the Tunguska Event, which was not observed by any living person, is thought to be an air-burst explosion of the atmospheric entry of a meteoroid, asteroid, or comet.

Information & Maps On How to View the 2 Comets -


Source: Glenn A. Walsh Reporting for SpaceWatchtower, a project of Friends of the Zeiss.
2017 February 19. 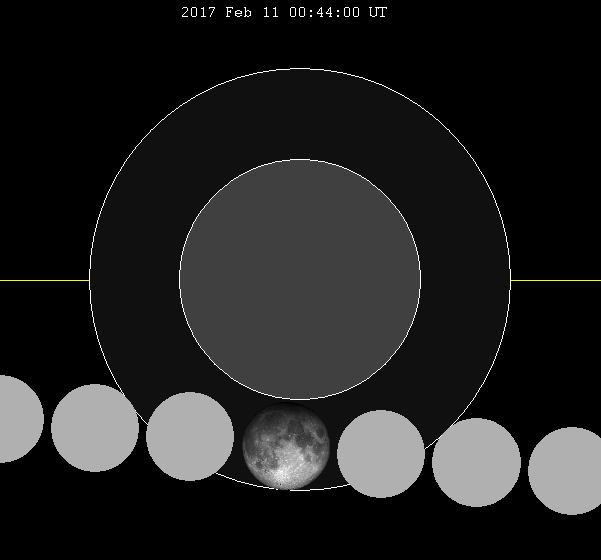 This graphic shows how the Moon travels through the Earth's Penumbral Shadow during the
Penumbral (partial) Lunar Eclipse of 2017 February 10 to 11. The central gray area (analogous
to a "donut-hole") represents the Umbral (darker) Shadow, while the Penumbral (lighter) Shadow
would be represented by the circle comprising the rest of the "donut."
(Graphic Source: Wikipedia.org , By SockPuppetForTomruen at English Wikipedia - Own work, Public Domain, https://commons.wikimedia.org/w/index.php?curid=17111804 )

The first eclipse of 2017, during the Full Moon of February, will be a Penumbral (partial) Lunar Eclipse, or Eclipse of the Moon, which may be dimly visible Friday to Saturday, 2017 February 10 to 11 throughout most of the world, except extreme western Alaska, extreme eastern Asia, Australia, New Zealand and most of the Pacific Ocean. An Internet web-cast of the event will be available for areas where this eclipse cannot be seen, or for areas where inclement weather precludes viewing.

Any Lunar Eclipse or Eclipse of the Moon, whether Total, Partial, or Penumbral, is the type of eclipse which is safe to look at with the naked-eyes, binoculars, and telescopes.

During an Eclipse of the Moon, the Earth's solar shadow shines on part or all of the Moon, always at the time of a Full Moon (when the Moon, Earth, and Sun, in that order, lie in a straight line). As sunlight strikes our planet, the Earth actually casts two shadows into Outer Space: the main and darker, cone-shaped Umbral Shadow, along with the secondary and dimmer Penumbral Shadow which surrounds the Umbral Shadow.

Technically, the entire eclipse lasts four and one-third hours. However, the human eye cannot perceive the entire eclipse, due its dim nature. Likely, one or two hours of the eclipse, centered around the time of greatest eclipse, may be visible to most people.

As this eclipse occurs when the Moon is rising in the Western Hemisphere (on the evening of February 10), it is best seen in the eastern sections of North and South America; the farther west the observer, the more the observer will have to contend with evening twilight. Asian viewers have the opposite problem, as they will need to contend with morning twilight (on February 11) as the Moon is about to set. The entire eclipse will be visible to viewers in Europe, Africa, Middle East, Greenland, Iceland, Quebec, New England, and most of Brazil.

To determine when the Moon rises and / or sets in your location, you can enter your locality data on a form of an Internet web page managed by the U.S. Naval Observatory; both Form A (for U.S. Cities and Towns) and Form B (for Locations Worldwide) are on this web page. A link to this web page is located at the end of this blog-post.

The bright object to the lower left the Moon (during the evening hours of Feb. 10) and above and closer to the Moon (in the morning hours of Feb. 11), during this eclipse, is the Star Regulus, brightest star of the well-known Constellation Leo the Lion and one of the brightest stars in the sky. About 11 hours after the eclipse (February 11, 9:00 a.m. EST / 14:00 UTC) the Moon will occult, or cover-up, Regulus; this occultation is visible in areas where the eclipse was not visible, including Australia and New Zealand.

Of course eclipses, like all celestial observations, are weather-permitting. If the weather in your area does not permit direct viewing outdoors of this Penumbral (partial) Eclipse of the Moon, it can be viewed during a special, live web-cast on the Internet, followed by a live web-cast of Comet 45P / Honda-Mrkos-Pajdusakova as the Comet is about to make its closest approach to Earth since 1983. A link to this web-cast is located at the end of this blog-post.

Other eclipses this year include an Annular Solar Eclipse later this month, on February 26. The other Lunar Eclipse in 2017 is a Partial Lunar Eclipse on August 7. And, this year's eclipses culminate in the middle of Summer with the Great American Total Eclipse of the Sun on August 21, which will follow a path across the United States from Oregon to South Carolina!

Once every 19 years, February has no Full Moon. This is due to the fact that February has only 28 days (29 days once every four years during the Leap Year) while the time duration of the Moon's orbit around the Earth is even shorter: 27.32166 days.


Source: Glenn A. Walsh Reporting for SpaceWatchtower, a project of Friends of the Zeiss.
2017 February 10. 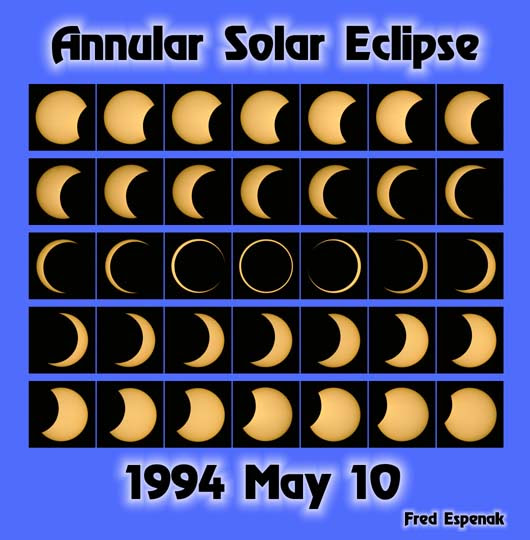 The last Annular Eclipse of the Sun visible in Western Pennsylvania occurred on
1994 May 10, when the path of annularity passed through Erie County, Pennsylvania,
including the site of the Mercyhurst College Observatory in North East, Pennsylvania.
The above eclipse images were taken in Chrissy, Ohio, just west of Toledo.
(Image Source: ©1994 by Fred Espenak)
This month (on Feb. 26) an Annular Solar Eclipse will occur in the Southern Hemisphere.
More info on this eclipse:
Link >>> http://buhlplanetarium4.tripod.com/astrocalendar/2017.html#eclipse-sol-ann-2017-2-26
NEVER look directly at a Solar Eclipse or Eclipse of the Sun unless you have the training and proper equipment to do so safely.
SAFE WAY TO VIEW SOLAR ECLIPSE OR ECLIPSE OF THE SUN:
Link >>> http://andrewcarnegie.tripod.com/solflyer2.htm