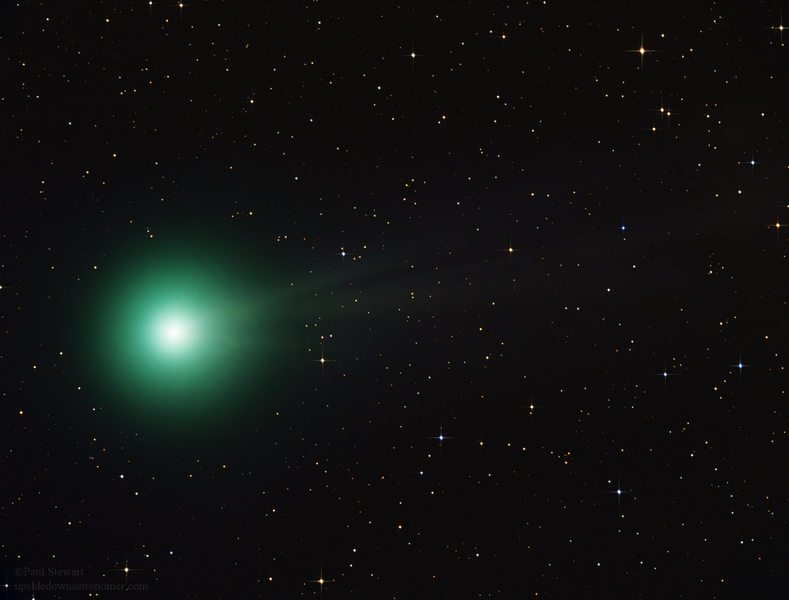 This also starts about a two-week period when the comet will be the most visible in the sky. The comet's closest approach to the Sun comes on January 30.

Although Comet Lovejoy is closest to the Earth today, light from the nearly Full Moon still makes it difficult to find. However, over the next two weeks, as the Moon rises an hour later each night, there is more time to find the comet in a darker sky.

Of course, city lights are also a problem when looking for Comet Lovejoy. It is best to get away from city lights, if possible, to find the comet.

On Monday, Comet Lovejoy had a reported apparent visual magnitude of ~ +4.4 to +5.0. Over the second and third weeks of January, the comet is expected to glow at around +4th magnitude. Under ideal conditions with no city lights and before Moon rise, the comet will be dimly visible to the naked-eyes. Binocular and telescope views of the comet should be easier, as long as one knows where to look for it.

In Astronomy, the apparent visual magnitude is the measurement of the apparent brightness of a celestial object seen by an observer on the Earth, if the Earth had no atmosphere. The lower the number (and negative numbers are considered lower than positive numbers), the brighter the object. The extreme naked-eye visibility limit is considered between magnitudes +7 and +8. Still, observing conditions have to be reasonably good to view a comet with the naked-eyes.

Currently, Comet Lovejoy is in the northern portion of the southern constellation of Eridanus, nearly 20 degrees west of the belt of Orion the Hunter, one of the classic Winter constellations. The comet continues moving north. Hence, as the moonlight becomes less of a problem each evening (the Moon rises about an hour later each night), the comet will be higher in the sky and should be easier to find.

As the comet moves north, and higher in the sky over the next two weeks, it will pass through the constellations of Taurus the Bull, Aries the Ram, and Triangulum. On January 17, Comet Lovejoy passes 8 degrees west-southwest of the Pleiades Star Cluster.

Although today is the closest to the Earth that the comet will reach, over the next days it is expected to get just a little brighter, as the comet gets higher in the sky, and as it gets closer to the Sun. However, by the end of the month, when it reaches its closest approach to the Sun, the brightness will start fading.

On Sunday, Europe's Virtual Telescope Project will provide a live, Internet web-cast of Comet Lovejoy, using one of their robotic telescopes. The web-cast will begin on January 11 at 2:00 p.m. EST / 19:00 Coordinated Universal Time (UTC) (an earlier web-cast occurred on January 6, which is archived on their web site).

More about finding Comet Lovejoy, including a finder-chart (finder-chart at end of article):
Link >>> http://www.skyandtelescope.com/astronomy-news/observing-news/spot-comet-lovejoy-tonight-122920141/