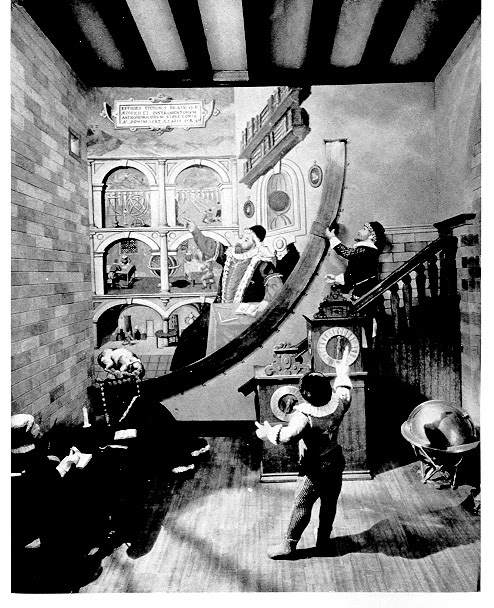 This photograph depicts a classic exhibit showing Tycho Brahe's Mural Quadrant,
an early tool used by astronomers to plot the positions of stars, displayed in the
Hall of the Universe of Pittsburgh's original Buhl Planetarium and Institute of
Popular Science. The Quandrantid Meteor Shower was named after such a
wall quadrant tool. (Image Source: Friends of the Zeiss)

The annual Quadrantid Meteor Shower, which peaks tonight, is part of a busy weekend of astronomical events, which also includes Earth's closest approach to the Sun for the year and this month's Full Moon. A new comet is also starting to reach visibility.

The Quadrantid Meteor Shower peaks tonight at 8:51 p.m. EST / January 4 at 1:51 Coordinated Universal Time (UTC). If skies are clear, and viewers are away from city lights, under ideal conditions observers could see as many as 100 meteors per hour.

Clear skies are always a must for meteor viewing, something not always available in early Winter skies. And, it is always best to get away from city lights, for the chance to see the dimmer meteors.

As always, the best viewing for a meteor shower is between local midnight and local dawn, when the Earth is rotating into the meteor shower. However, this year's Quadrantid Meteor Shower comes about a day before Full Moon. Brightness from a nearly Full Moon, which will be visible most of the night, will make it more difficult to see some of the dimmer meteors.

The Quadrantid Meteor Shower has one of the shortest peaks of all meteor showers, lasting only about an hour or two. And, the peak hour, for this meteor shower, is often difficult to predict, so observers need to be watching a few hours both before and after the announced peak time.

The Quadrantid Meteor Shower, the first meteor shower of the calendar year, gets its name from a defunct constellation: Quadrans Muralis. So named by French astronomer Joseph Lalande in 1795, Quadrans Muralis was formed in a relatively empty part of the sky bounded by other constellations: Bootes, Draco, and Hercules. The constellation's name comes from an eighteenth century astronomical tool, the wall quadrant, that was used to plot the positions of stars.

Although meteors appear to radiate from the part of the sky where the Quadrans Muralis constellation was originally formed, meteors can appear in any part of the sky at any time.

For those who brave the cold weather to look for meteors tonight, you may want to also look for the newest comet in the night sky. Comet Lovejoy, which was discovered in August, has been brightening to the point where some people with good vision, and under ideal conditions, may be able to view Comet Lovejoy with the naked-eye. However, most people should be able to see it with binoculars or a telescope. And, the nearly Full Moon will also make the comet difficult to find.

Discovered on August 17 by Australia amateur astronomer Terry Lovejoy, Comet Lovejoy was not expected to become a bright comet. However, as often happens, comet brightness predictions have proven wrong.

Comet Lovejoy continues brightening as it moves further into the northern sky. By the middle of next week, the comet is expected to be visible just above the Constellation Eridanus and to the right of the bottom half of the bow of Orion the Hunter, one of the classic Winter constellations. At that time, it will also be closest to the Earth (44 million miles away) and will be entering its brightest phase for the next two weeks. It is expected to make its closest approach to the Sun on January 30.

More on how to find Comet Lovejoy:
Link >>> http://www.skyandtelescope.com/astronomy-news/observing-news/spot-comet-lovejoy-tonight-122920141/

Earth Closest to the Sun

Sunday morning at 3:59 a.m. EST / 8:59 UTC, the Earth reaches the point in its orbit around the Sun known as perihelion. This is the closest Earth will get to the Sun for the entire year: a distance of
147,096,204 kilometers.

Scientists often use the average distance between the Earth and the Sun, 149,600,000 kilometers (92,960,000 statute miles) for measuring vast distances in outer space. This average distance equals one Astronomical Unit (AU). So, when the Earth reaches perihelion, the distance is measured as 0.98328 AU.

When the Earth is closer to the Sun, it moves faster in its orbit around the Sun. Hence, Winter is a couple days shorter than the season of Summer, as the Earth moves more quickly toward the season of Spring.

This month's Full Moon occurs Sunday night at 11:53 p.m. EST / January 5 at 4:53 UTC. To most Native Americans, the Full Moon of January was known as the Wolf Moon (although some references refer to the December Full Moon as the "Wolves" Moon). Of course this refers to the hungry wolf packs howling on cold and snowy night outside Indian villages.