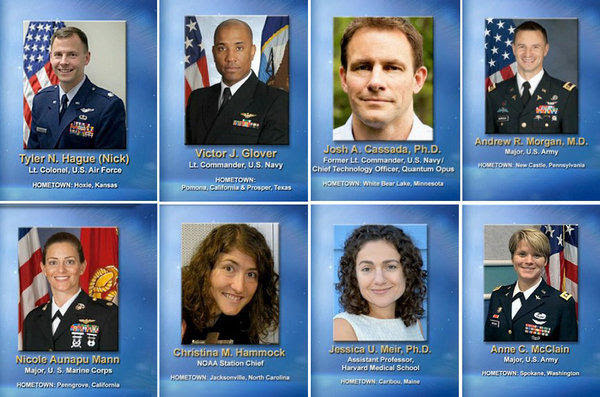 
It’s been two years since NASA’s space shuttle program came to an end, but thousands of Americans still dream of becoming astronauts. Eight of them – four men and four women – were introduced Monday as NASA’s astronaut candidate class for 2013.

More than 6,300 people applied to become astronauts-in-training, NASA Administrator Charles Bolden said in a video announcement. That is the second-most applications the space agency has ever received, according to a NASA statement.

The bios of the eight people selected will probably make you feel like a bit of a slacker. Two of them have PhDs and one is a physician training in sports medicine. Four have experience as test pilots for the Navy or Air Force. One person is working at the Pentagon on ways to defeat the homemade bombs that have plagued troops in Iraq and Afghanistan. One of them is the station chief for the National Oceanic and Atmospheric Administration’s research outpost in American Samoa.

Some NASA watchers certainly see this as a cause for celebration. On the other hand, the fact that we’re even talking about whether these new astronauts are men or women is a sign that there’s still a ways to go. In the earliest days of the American space program, 13 women were being considered for the astronaut corps before then-Vice President Lyndon B. Johnson quashed a proposal to test their worthiness for space, Meg Waite Clayton wrote in a Los Angeles Times op-ed marking the 50th anniversary of the first spaceflight by a woman.