Snowboarding on Mars? Gullies by Cascades of Dry Ice 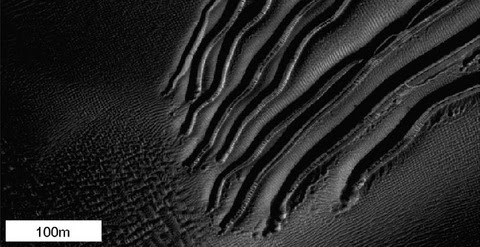 Mars' surface is streaked with furrows and ditches across its rusty red soil, mimicking our planet's river plains. But unlike Earth, Mars has no surface rivers or streams that would leave such marks.

Serina Diniega, a planetary scientist at NASA's Jet Propulsion Laboratory in Pasadena, Calif., and lead author of a report published online in the journal Icarus, determined these signature gullies on its red sand dunes are a result of cascades of dry ice running across the planet's surface every spring.

"I have always dreamed of going to Mars," Diniega said in a post on NASA's website. "Now I dream of snowboarding down a Martian sand dune on a block of dry ice."

At first glance, the channels look like riverbeds on Earth. But when rivers on Earth reach their end, they leave a plain of silt and debris. Images from Mars Reconnaissance Orbiter's High Resolution Imaging Science Experiment camera show linear gullies on Mars' surface end abruptly.

The HiRISE images also showed the red dunes covered by carbon-dioxide frost during the Martian winter. By comparing photos from different seasons, researchers determined that the grooves must have formed during early spring. Some images revealed bright objects in the gullies, which researchers determined was dry ice.

Dry ice is carbon dioxide in its solid form, something that doesn't naturally form on Earth's surface, Diniega said. But it's abundant on Mars, where a CO2-rich atmosphere produces snowbanks of frozen carbon dioxide, not water.