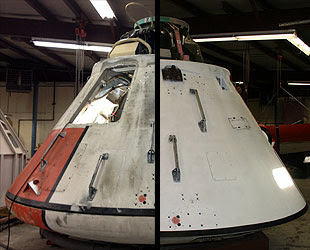 March 6, 2012 – A dummy capsule that NASA used in the lead up to the Apollo moon landings has been restored to its former glory to inspire a new generation of space explorers at a California learning center.

The red-and-white painted capsule, known as "Boilerplate 19A" (BP-19A), was built in the early 1960s by the same aerospace company and to the same basic design specs as the space-worthy command modules that flew crews to the moon and back. But instead of lifting off, BP-19A was dropped out of a cargo plane to test the recovery systems that would safely land astronauts back on Earth.

More than four decades after its final test flight and years after being displayed outdoors in a county park, BP-19A was entrusted to SpaceWorks, the exhibition design and artifact preservation division of the Kansas Cosmosphere and Space Center in Hutchinson, KS, for its restoration.