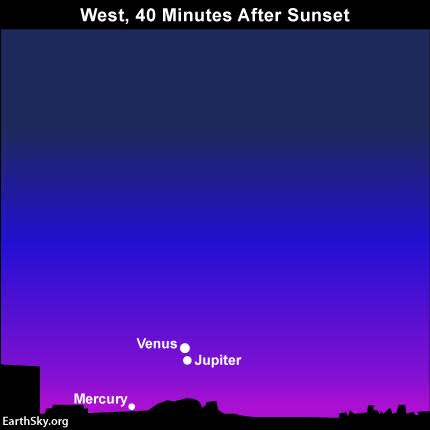 Low on the western horizon, Venus and Jupiter will have an amazingly
close conjunction shortly after sunset on Saturday evening, and
Mercury may be dimly visible even lower. (Image Source: EarthSky.org)

Saturday evening (2016 August 27), shortly after local sunset, the planets Venus and Jupiter can be seen in an extremely close conjunction. In fact, the brightest two planets in our Solar System will be so close that, to the naked-eye, they may look like one very bright object!

Actually, this will be a triple conjunction, as to the lower left of the conjunction of Venus and Jupiter, if you look very carefully you may even be able to make-out the small planet, Mercury. Right after sunset, Mercury will be hugging the horizon. So, do not be surprised if you cannot find it. To find Mercury, you will need a very good western horizon and good seeing conditions.

Venus and Jupiter, which are the third and fourth brightest objects in the sky, respectively (the Sun and Moon are the first and second brightest, respectively), will be very close to the horizon—only about 5 degrees above the horizon—after sunset; and, Mercury will be much lower. If you hold your closed-fist at arm's-length, the diameter of the closed-fist is about 10 degrees-of-arc; so, half of that distance is the height of the conjunction above the Earth's horizon.

So, to view this conjunction, you should be on the highest hill possible, with a very good view of the western horizon, with few obstructions such as trees, buildings, or other hills. At mid-northern latitudes in the Northern Hemisphere, you will have about a half-hour to view the conjunction, as the planets will set about an hour after sunset. In the Northern Hemisphere, Jupiter will appear just below Venus, while the much smaller and dimmer Mercury will be to the lower left of Venus and Jupiter.


To view this conjunction, start watching for Venus, the brighter of the two planets, about a half-hour after sunset. After you find Venus, Jupiter should appear just below Venus just a little later. Late Summer haze and humidity, particularly near the horizon, could make the conjunction more difficult to find. But, if you see a bright spot twinkling, you will likely have found Venus; although planets do not normally twinkle, as do stars, any bright object near the horizon is likely to twinkle.

This year's closest approach of two planets (as viewed from Earth) will actually occur a little before sunset. On Saturday Evening, 2016 August 27 at 6:00 p.m. Eastern Daylight Saving Time (EDT) / 22:00 Coordinated Universal Time (UTC), the two planets will be in conjunction (when they have an identical right ascension, of an east-west celestial coordinate system) at 0.1 degree of separation. Actually, about a half hour later, at 6:31 p.m. EDT / 22:31 UTC, the two planets will be at their very closest at 0.067 degree or 4 arc-minutes of separation; this closest approach is known astronomically as an appulse. So, although most people will be viewing the two planets, technically, a little bit after the conjunction and the appulse, Venus and Jupiter will still be extremely close until they set.

Of course, as with all celestial observing, viewing this conjunction will be weather-permitting. If there are too many clouds in the western sky after sunset, particularly close to the horizon, the conjunction likely will not be seen.

For several months, Jupiter has shone as the bright planet in the evening sky. Now, Jupiter's position in the sky each night is lower, as it meets Venus on August 27. Soon, Jupiter will be so close to the Sun (as viewed from Earth) that it will no longer be visible; in fact, Jupiter and the Sun will be in conjunction a month from now (September 26 at 3:00 a.m. EDT / 7:00 UTC). In October, Jupiter reappears in the morning sky.

Venus had just reappeared low in the evening sky last month. Venus had its own conjunction with the Sun, superior conjunction, on June 6 at 6:00 p.m EDT / 22:00 UTC. Now, each night Venus rises a little higher in the sky, and by Autumn Venus will be the very bright evening planet for the rest of the year.

This will be one of the closest conjunctions, without the possibility of an occultation of the two planets. An occultation of Jupiter by Venus is even more rare than a close conjunction, such as the one that will occur this evening. The last Venus - Jupiter occultation occurred in 1818, with an earlier one in 1570.. The next one will occur in 2065, but probably will not really be visible, as the two planets will only be 8 degrees from the Sun. The next one after 2065, which will occur in 2123, may be visible at 16 degrees from the Sun.

Even without a major conjunction, Venus is so bright it is often mistaken for an unidentified flying object (UFO). During the months Venus was visible in the nighttime sky, I would often receive telephone calls at Pittsburgh's original Buhl Planetarium and Institute of Popular Science (a.k.a. Buhl Science Center), in the evening hours during the 1980s and early 1990s, from people asking what the very bright object is in the western sky.

In fact Venus and Jupiter are so bright, the pairing of the two planets in 2014 almost caused an international incident between India and China. Indian Army sentries along the Himalayan border mistook the two planets for spy drones from China. Indian astronomers correctly identified the conjunction before the Indian Army took steps against the supposed Chinese incursion.

Precise Time for Sunset for any Location on Earth:
Link >>> http://aa.usno.navy.mil/data/docs/RS_OneDay.php


Source: Glenn A. Walsh Reporting for SpaceWatchtower, a project of Friends of the Zeiss.
2016 Aug. 27.