Another Odd Object Found Beyond Neptune! 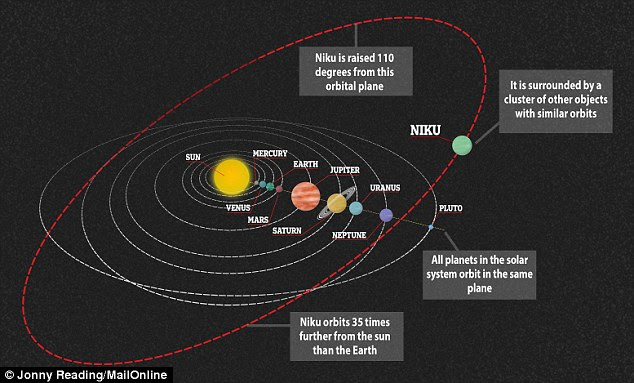 Newly-discovered Trans-Neptunian Object "Niku" revolves backwards around the Sun, with an eccentric orbit tilted 110 degrees from the orbits of other planets.
(Graphic Source: Jonny Reading @ dailymail.co.uk)

After last month's discovery of a large asteroid in our Solar System beyond the orbit of Neptune, now a smaller Trans-Neptunian Object (TNO) with a very eccentric orbit has been discovered. At an orbit with an inclination of 110 degrees from the orbits of the other planets, which swings backwards in its orbit around the Sun, this new object is a mystery that cannot be easily explained.

Designated 2011 KT19 due to its original discovery in 2011, it was lost until this month when scientists realized the object's strange orbit. It could be an asteroid or possibly a large comet The object is 160,000 times fainter than Neptune, which means it could be as small as 124,000 miles / 200,000 kilometers in diameter.

This TNO has been nicknamed Niku, which is the Chinese adjective for rebellious. It is currently located above the plane of our Solar System, and it is continuing to move even higher beyond the plane, which astronomers do consider rebellious.

There are seven other TNOs that have a similar orbit around the Sun. The reasons for the unusual orbits, by these eight objects, is unknown. It is extremely unlikely that this occurred by chance, which suggests the influence of a larger object, perhaps the “Planet 9” astronomers are searching for, or a smaller asteroid.

So, it is thought that these particular TNOs probably had a common origin. Further, it is speculated that, originally, they did have fairly normal orbits, before being perturbed by some large object.

Normally, in a solar system, all planets revolve around the star in a particular plane. This is how solar systems are formed from gas and dust. According to Queens University, Belfast, Astronomer Michele Bannister, “Angular momentum forces everything to have that one spin direction all the same way. It’s the same thing with a spinning top, every particle is spinning the same direction.”

Of course, there are other exceptions. Pluto's orbit has an eccentric inclination, with regard to the plane of the Solar System. However, Pluto's inclination is only 17 degrees. Also, some comets, including Halley's Comet, do orbit the Sun in a retro-grade fashion.

Although the so-called “Planet 9” was the first candidate to explain the odd behavior of these TNOs, the scientists now believe this group of TNOs is being influenced by yet another unknown object in the Outer Solar System, perhaps another Dwarf Planet such as Pluto. They say that this particular group of TNOs is too close to Neptune's orbit to be influenced by the, yet-to-be-found, Planet 9.

This is because, when found, Planet 9 is expected to be fairly large, perhaps 10 times as large as the Earth. They believe that if Planet 9 was as close to the orbit of Neptune as Niku, it would have been discovered by now, due to its assumed great size. Currently, it is estimated that Planet 9 should be found 20 times the distance of Neptune from the Sun.

A team of astronomers, using the Pan-STARRS (Panoramic Survey Telescope and Rapid Response System) Telescope System developed by the Institute of Astronomy at the University of Hawaii, discovered Niku. These discoverers of Niku include Ying-Tung Chen, Shiang-Yu Wang, and Matthew Lehner from the Institute of Astronomy and Astrophysics in Taipei, Taiwan and Hsing Wen Lin, Wing-Huen Ip, and Wen-Ping Chen of the Institute of Astronomy of the National Central University in Taiwan. The other authors of the preliminary scientific paper on Niku are Matthew J. Holman and Matthew J. Payne of the Harvard-Smithsonian Center for Astrophysics; Wesley C. Fraser of Queens University in Belfast, Northern Ireland; Pedro Lacerda of the Max-Planck Institute in Gottingen, German; and Rolf-Peter Kudritzki, Robert Jendicke, Richard J. Wainscoat, John L. Tonry, Eugene A. Magnier, Christopher Wates, and Nick Kaiser of the Institute for Astronomy at the University of Hawaii.


Source: Glenn A. Walsh Reporting for SpaceWatchtower, a project of Friends of the Zeiss.
2016 Aug. 16.