New Year Did Not Always Begin on January 1 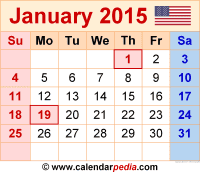 
These early calendars were mostly based on the cycles of the Moon, which produced calendars which were quite inaccurate as the years went by. It would be Julius Caesar who would provide the first great improvement in the calendar, by switching to a calendar based on the Earth's revolution around the Sun (of course, at that time they believed the Sun revolved around the Earth).


In 46 B.C. Julius Caesar created the first solar-based calendar, which we know today as the Julian Calendar. And, with the Julian Calendar came the decree that January 1 was the beginning of the New Year throughout the Roman world. This made sense, as January had been named for the Roman God Janus, the God of doors and gates; hence, the entrance or beginning of the calendar.


However, with the rise of the Christian Church, many of the New Year's celebrations were seen as unchristian-like and considered pagan. So, at the Roman Catholic Church's Council of Tours in A.D. 567, January 1 was abolished as the beginning of the calendar year. During medieval times, the beginning of the New Year was celebrated on various dates in various places. These dates included December 25 for the birth of Christ, March 1, March 25, the Feast of the Annunciation, and Easter Sunday.


It was with the final major reform of the calendar, by Pope Gregory XIII in A.D. 1582, that January 1 was restored as the beginning of the New Year. However, the new Gregorian Calendar, with the January 1 start-date, was only observed in countries where the Roman Catholic Church was the dominant religion.


Protestant countries, fearful of allowing any influence of the Roman Catholic Church, were slow to adopt the Gregoran Calendar. It was almost 200 years later when the British Empire, including the American colonies, finally adopted the Gregorian Calendar, with the January 1 start-date, in A.D. 1752. Until then, the British Empire, including America, had continued to observe the beginning of the New Year on March 25.


Alaska, which had been a Russian territory (Russia, at that time a predominantly Eastern Orthodox Catholic country, which continued to use the Julian Calendar), did not adopt the Gregorian Calendar until 1867, when the United States purchased the territory from Russia.


Today, nearly all civil calendars, world-wide, use the Gregorian Calendar, and recognize January 1 as the beginning of the New Year. However, many religions still follow their own calendars, to determine holy days and religious festivals.

More on the Adoption of the Gregorian Calendar:
Link >>> http://en.wikipedia.org/wiki/Adoption_of_the_Gregorian_calendar