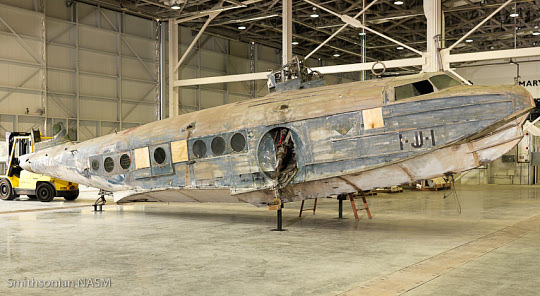 From Friday's edition of the PBS NewsHour:

Tonight, we bring you a rare survivor of that day, an American military plane that is the last of its kind. We tagged along at the Smithsonian’s Air and Space Museum’s Udvar-Hazy Center, as curator Dr. Jeremy Kinney showed off the seaplane to a volunteer and explained the debate over how to restore it.

This is a Sikorsky JRS-1 flying boat. And it’s the only artifact in the Air and Space Museum’s collection that was present at Pearl Harbor on 1941 December 7.

In the immediate aftermath of the attack on Pearl Harbor, this JRS flew in search of Japanese submarines and the Japanese carrier fleet. And then as the months wore on through 1942, it continued its support mission for Navy fighting, bombing and torpedo squadrons.

This particular JRS flew until 1944 with the U.S. Navy. It went into storage. The Navy kept it as an airplane. It actually performed yeoman’s service with the NACA, the National Advisory Committee for Aeronautics, which is now NASA today, as an air dynamics testing platform.

But it’s the things that curators and specialists and conservators agonize over. That’s a — it’s a big debate in terms of what we want to do with it, because it’s only original once, even though it’s in rough shape.