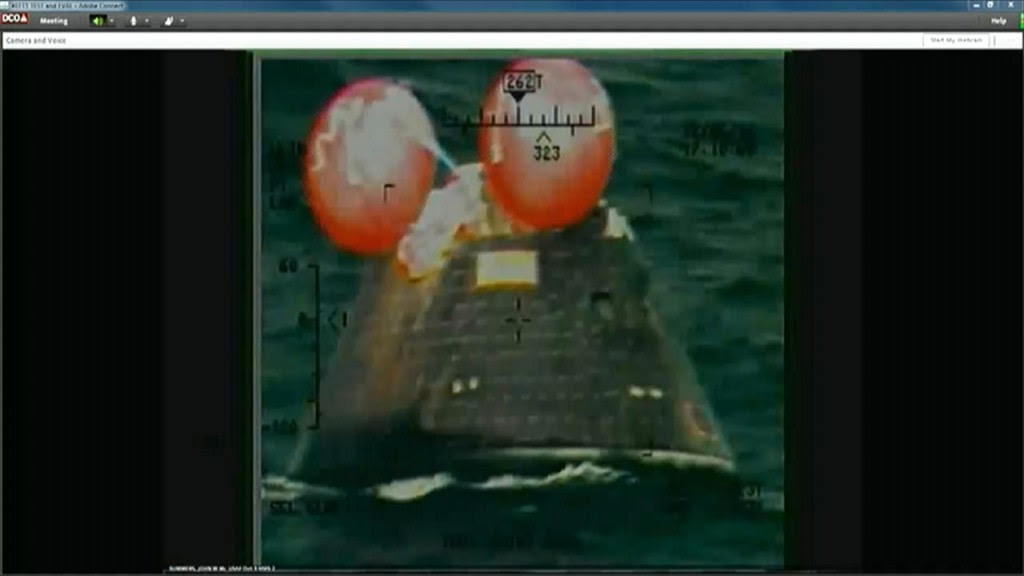 After a one-day delay due to high ground winds and a technical problem with the Delta IV Heavy launch rocket, NASA had great success on Friday morning with the first test of the Orion Deep-Space Vehicle. The Orion capsule, successor to the Space Shuttle and the first deep-space transport since Project Apollo, is expected to take astronauts back to the Moon, to asteroids, and perhaps eventually to Mars.

However, the launch occurred right on time this morning, just after sunrise, at 7:05 EST / 12:05 UTC. And from then on, the test mission went like clock-work. The uncrewed flight lasted four and a-half hours, making nearly two full orbits of the Earth before landing in the Pacific Ocean, 270 miles west of Mexico's Baja California peninsula, right on schedule at 11:29 a.m. EST / 16:29 UTC.

While the Space Shuttle and the International Space Station fly in low-Earth orbit, about 250 miles above the Earth, Orion is designed to fly in deep-space. And, during this test flight, Orion flew more than 3,500 miles above the Earth, proving its deep-space capabilities. This is the first human-rated spacecraft to fly that far from the Earth since December of 1972, when Apollo 17 was the last mission that sent men to the Moon.

At NASA's post-mission media briefing, it was mentioned that the video processing units on-board Orion were automatically reset due to higher radiation experienced as Orion flew through the Van Allen Radiation Belts. However, scientists were pleased that no computer units experienced such resets.

The Van Allen Radiation Belts (two main belts exist) are layers of energetically-charged particles held in-place in Earth's upper atmosphere by our planet's magnetic field. They were named for University of Iowa space scientist Dr. James Van Allen, who discovered the radiation belts at the very beginning of the Space Age, from data received from three early satellites launched in 1958: Explorer 1, Explorer 3, and Pioneer 3. The Van Allen Radiation Belts extend 600 to 37,000 miles above the Earth, much higher than the orbit of the International Space Station or orbits used by the Space Shuttle.

For this mission, NASA used drones, in addition to chase aircraft, to obtain video of the spacecraft as it neared splash-down. Following splash-down, recovery of the spacecraft is being handled by two U.S. Navy ships: an amphbious transport dock ship, the USS Anchorage, and the Military Sealift Command rescue and salvage ship, USNS Salvor.

Once back on land, at Naval Base San Diego, the Orion capsule will be trucked back to the Kennedy Space Center in Florida. Due to the fact that the spacecraft will still contain unused fuel and other dangerous chemicals, the trucking firm that transports Orion will have to meet hazardous transport regulations for each state the truck travels through.