What If Spacewalker's Tether Breaks?

Astronaut Talks About Being In Untethered Hot Spot 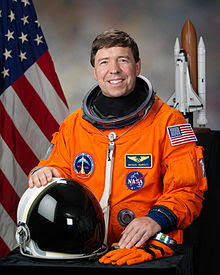 Michael Barratt, who spent 199 days on the ISS, told kids at the annual meeting of the AAAS how a space walker whose line snaps can still get back to the station. Steve Mirsky reports.

Astronaut Michael Barratt spent 199 days on the International Space Station in 2009. On February 17th, 2013, he told kids about his time in space as part of the Family Science Days effort at the annual meeting of the American Association for the Advancement of Science in Boston. Questions from the children covered the basics: eating, sleeping and waste management. Then Barratt got this question from a child, whose mom then elucidated:

Kid: What happens is someone, the line goes off.

Barratt: If the light goes off?

Mom: No, no, if you’re at the station and you know how the astronauts are being held together by some kind of line or pipe. What if that snaps?

Barratt: So if you’re out on a space walk, you’re very careful about keeping yourself attached. So we always have two ways to attach yourself to the space station. If you come totally free, if you’re wearing the US space suit, you’ve got a little jetpack back there. So you pull a little control and a joystick in front of you, and you can actually fly yourself back to the station. We’ve never had to do that. But believe me, having done a couple of space walks, that is on your mind—you don’t want to become a satellite.

—Steve Mirsky
[The above text is a transcript of this podcast]