When Will the Internet Reach Its Limit (and How Do We Stop That from Happening)?

By Larry Greenemeier
14
in 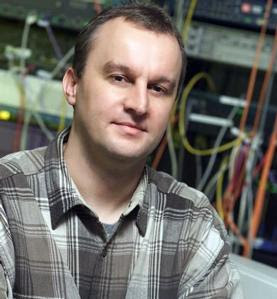 INFORMATION NETWORKER: Markus Hofmann, head of Bell Labs Research in New Jersey, says the Internet has to get smarter to keep up with growing demand for its services. Image: Courtesy of Bell Labs
The number of smartphones, tablets and other network-connected gadgets will outnumber humans by the end of the year. Perhaps more significantly, the faster and more powerful mobile devices hitting the market annually are producing and consuming content at unprecedented levels. Global mobile data grew 70 percent in 2012, according to a recent report from Cisco, which makes a lot of the gear that runs the Internet. Yet the capacity of the world’s networking infrastructure is finite, leaving many to wonder when we will hit the upper limit, and what to do when that happens.

There are ways to boost capacity of course, such as adding cables, packing those cables with more data-carrying optical fibers and off-loading traffic onto smaller satellite networks, but these steps simply delay the inevitable. The solution is to make the infrastructure smarter. Two main components would be needed: computers and other devices that can filter their content before tossing it onto the network, along with a network that better understands what to do with this content, rather than numbly perceiving it as an endless, undifferentiated stream of bits and bytes.

To find out how these major advances could be accomplished, Scientific American recently spoke with Markus Hofmann, head of Bell Labs Research in New Jersey, the research and development arm of Alcatel–Lucent that, in its various guises, is credited with developing the transistor, the laser, the charge-coupled device and a litany of other groundbreaking 20th-century technologies. Hofmann and his team see “information networking” as the way forward, an approach that promises to extend the Internet’s capacity by raising its IQ.