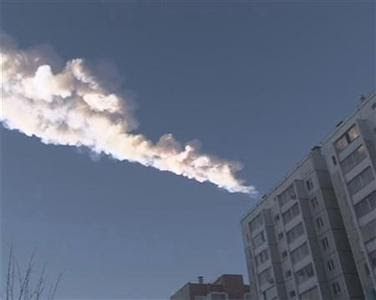 (Reuters) - More than 500 people were injured when a meteorite shot across the sky and exploded over central Russia on Friday, sending fireballs crashing to Earth, shattering windows and damaging buildings.

People heading to work in Chelyabinsk heard what sounded like an explosion, saw a bright light and then felt a shockwave according to a Reuters correspondent in the industrial city 1,500 km (950 miles) east of Moscow.

A fireball blazed across the horizon, leaving a long white trail in its wake which could be seen as far as 200 km (125 miles) away in Yekaterinburg. Car alarms went off, windows shattered and mobile phone networks were interrupted.

"I was driving to work, it was quite dark, but it suddenly became as bright as if it was day," said Viktor Prokofiev, 36, a resident of Yekaterinburg in the Urals Mountains.

"I felt like I was blinded by headlights," he said.

No fatalities were reported but President Vladimir Putin, who was due to host Finance Ministry officials from the Group of 20 nations in Moscow, and Prime Minister Dmitry Medvedev were informed.