Moon Passes Jupiter This Weekend As Viewed In Sky

Jupiter and the Moon Have a Close Encounter in the Sky February 18, 2013 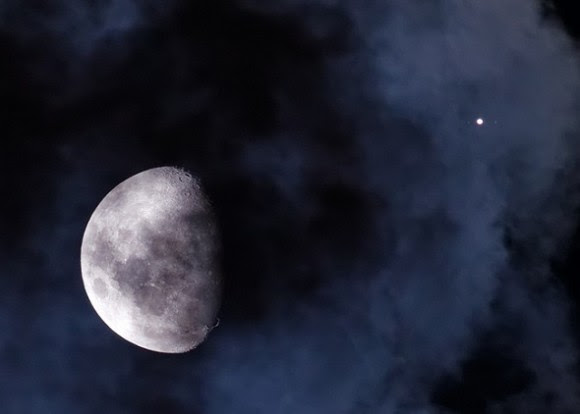 The January 2013 occultation of Jupiter by the Moon as seen from South America. (Image courtesy of Luis Argerich & Nightscape Photography; used with permission.

The movement of the Moon makes a fascinating study of celestial mechanics. Despite the light pollution it brings to the nighttime sky, we’re fortunate as a species to have a large solitary satellite to give us lessons in “Celestial Mechanics 101″

This weekend, we’ll get to follow that motion as the Moon crosses into the constellation Taurus for a near-pass of the planet Jupiter, and for a very few citizens of our fair world, occults it.
In astronomy, the term “occultation” simply means that one astronomical body passes in front of another. The term has its hoary roots in astronomy’s ancient past; just like the modern day science of chemistry sprung from the pseudo-science of alchemy, astronomy was once intertwined with the arcane practice of astrology, although the two have long since parted ways. When I use the term “occultation” around my non-space geek friends, (I do have a few!) I never fail to get a funny look, as if I just confirmed every wacky suspicion that they ever had about us backyard astronomers…

But those of us who follow lunar occultations never miss a chance to observe one. You’ll actually get to see the motion of the Moon as it moves against the background planet or star, covering it up abruptly. The Moon actually moves about 12° degrees across the sky per 24 hour period.