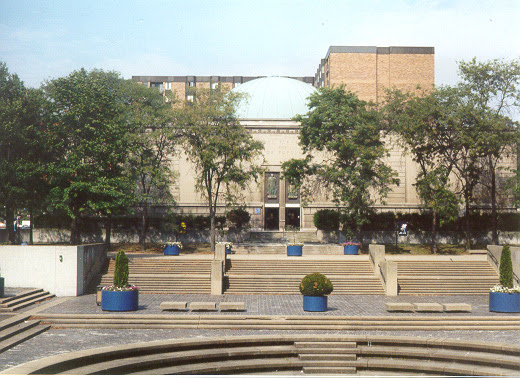 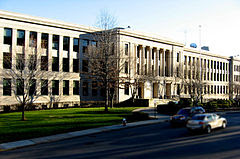 Photographs of two historic buildings, both constructed of Indiana limestone, in the City of Pittsburgh. The photograph on the left shows Pittsburgh's original Buhl Planetarium and Institute of Popular Science in the Allegheny Center section of the North Side, which was dedicated 1939 October 24 (Photo Source: Friends of the Zeiss; Photographer: Lynne S. Walsh). The photograph on the right shows Schenley High School in the Schenley Farms section of the Oakland neighborhood, which opened 1916 October 2 (Photo Source: Wikipedia.org ).

Last week, the weekly Pittsburgh City Paper published a news article on the efforts of graduates of Pittsburgh's Schenley High School to stop the Pittsburgh Public Schools from selling the historic building, so that the building can be converted into 178 luxury apartments. The Schenley alumni believe that the building is still usable as, and should remain as, a school:

In this week's issue of the Pittsburgh City Paper, Friends of the Zeiss Project Director Glenn A. Walsh responds with a Letter-to-the-Editor published in the "Incoming" column on page 6, comparing these efforts of the Schenley High School alumni with similar efforts, more than a decade ago, of former employees and volunteers of Pittsburgh's original Buhl Planetarium and Institute of Popular Science to maintain the educational capabilities of historic Buhl Planetarium equipment and artifacts in the historic Buhl Planetarium building, currently used for educational purposes by the Children's Museum of Pittsburgh.

Letter to the Editor

Although the Zeiss II Planetarium Projector is now on display at The Carnegie Science Center, it no longer does what is does best: a second-to-none, realistic depiction of the planets and stars in the night sky. The 10-inch Siderostat-type Refractor Telescope and most other artifacts remain in storage, benefiting no one.

Regrettably, I fear the final result from the efforts of the Schenley alumni will mirror the result of our efforts to preserve the functionality of the historic Buhl Planetarium apparatus.

More on the History of --