Recent UK Fireball Could Not Have “Skipped” Around the World, New Analysis Says 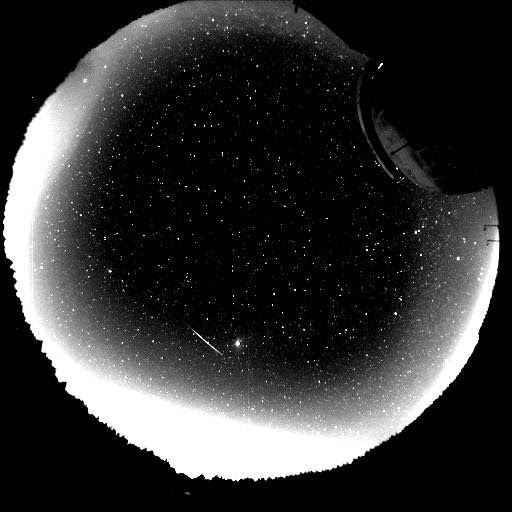 Image of fireball taken on Feb. 25, 2004 by the Elginfield CCD camera from the University of Western Ontario.

The meteoroid seen over the UK on September 21, 2012 has created quite a sensation – make that a several sensations. First, the bright object(s) in the night sky were seen across a wide area by many people, and the brightness and duration – 40 to 60 seconds reported and videoed by some observers – had some experts wondering if the slow moving light-show might have been caused by space junk. But analysis by satellite tracker Marco Langbroek revealed this was likely an Aten asteroid, asteroid which have orbits that often cross the Earth’s orbit, but their average distance from the Sun is less than 1 AU, the distance from the Earth to the Sun.

Atens are fairly unusual, making this a rather unique event. But then came another analysis that seemed to be so crazy, it might have been true: this meteoroid may have skipped like a stone in and out of Earth’s atmosphere, where it slowed enough to orbit the Earth until appearing as another meteor over Canada, just a few hours after it was seen over the UK and northern Europe.

How amazing that would have been! And there was much speculation about this possibility. But, it turns out, after more details emerged and further investigation ensued, it is not possible that the space rock could have boomeranged around the world and been seen in again 2½ hours later over Canada. However, the current thinking is that at least one or two of the largest pieces retained enough velocity that they went into an elliptical Earth orbit, and went perhaps a half an orbit around Earth.