Lloyd S. Shapley, Professor Emeritus of the University of California at Los Angeles and son of  to distinguished 20th century astronomer Harlow Shapley, has won the 2012 Nobel Prize in Economics, sharing the prize with Alvin E. Roth of Harvard University, currently a visiting professor at Stanford University. Alvin Roth, from 1982 to 1998, served as Andrew W. Mellon Professor of Economics at the University of Pittsburgh.

While his father, Harlow Shapley, was best known for determining the correct position of the Sun within the Milky Way Galaxy, it is less well known that Harlow Shapley actively promoted amateur astronomy. Harlow Shapley was one of the founders of the Astronomical League, a national organization for amateur astronomers. Early organizing meetings for the League, including a meeting at Pittsburgh's original Buhl Planetarium and Institute of Popular Science in the Summer of 1940, occurred just prior to World War II. However, the War delayed formal establishment of the League until 1947.

Harlow Shapley also supported planetaria and science museums. While Director of the Harvard College Observatory, he delivered the keynote address at the dedication of the rare 10-inch Siderostat-type Refractor Telescope at Pittsburgh's original Buhl Planetarium and Institute of Popular Science on 1941 November 19.

The following article talks about the 2012 Nobel Prize in Economics won by Lloyd S. Shapley and Alvin E. Roth. 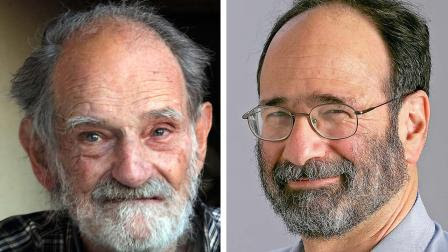 In this photo combination, UCLA professor emeritus Lloyd Shapley, left, is seen at his home Monday, Oct. 15, 2012, and Harvard professor Alvin E. Roth is seen in a 2008 photo provided by Harvard University. Shapley and Roth were awarded the Nobel economics prize Monday for studies on the match-making that takes place when doctors are coupled up with hospitals, students with schools and human organs with transplant recipients. (AP Photo/Reed Saxon, Harvard University)

October 15, 2012 (STOCKHOLM) -- Two American scholars won the Nobel economics prize Monday for work on match-making - how to pair doctors with hospitals, students with schools, kidneys with transplant recipients and even men with women in marriage.

Shapley, 89, came up with the formulas to match supply and demand in markets where prices don't do the job; the 60-year-old Roth put Shapley's math to work in the real world.

The 1920 Great Debate on the Scale of the Universe
Link >>> http://buhlplanetarium2.tripod.com/bio/greatdebate.html