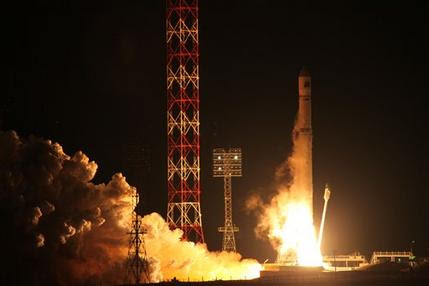 In this Wednesday, Nov. 9, 2011 file photo, the Zenit-2SB rocket with the Phobos-Ground probe blasts off from its launch pad at the Cosmodrome Baikonur, Kazakhstan. Some of the recent failures of Russian spacecraft may have been caused by hostile interference, Roscosmos chief Vladimir Popovkin said. Popovkin made the comment when asked about the failure of the unmanned Phobos-Ground probe, which was to explore one of the Mars twin moons, Phobos, but became stranded while orbiting Earth after its Nov. 9 launch. The spacecraft is expected to fall to Earth around Jan. 15. ( (AP Photo/File)

(AP) -- A Russian space probe designed to burnish the nation's faded space glory in a mission to one of Mars' moons has turned into one of the heaviest, most toxic pieces of space junk ever.

It will come crashing down to Earth in just a few days.
The Russian space agency Roscosmos' latest forecast has the unmanned Phobos-Ground probe falling out of Earth's orbit Sunday or Monday, with the median time placing it over the Indian Ocean just north of Madagascar. It said the precise time and place of its uncontrolled plunge can only be determined later, and unless someone actually spots fiery streaks in the sky, no one may ever know where any surviving pieces end up.