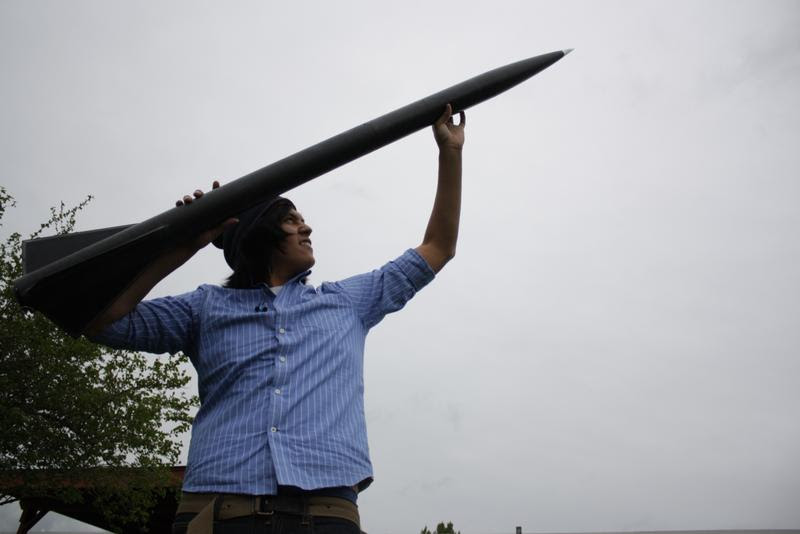 Christian Cultee, a student at the Northwest Indian College, with a rocket that broke the sound barrier. (Image Sources: KUOW Photo/Joshua McNichols)

The students at Northwest Indian College on the Lummi Reservation near Bellingham, Washington were launching little rockets made from recycled water bottles as a way to do some hands-on science.

Computer science teacher Gary Brandt says calling it a “space center” was just something one of the students came up with.

“And he said, ‘I called us the Northwest Indian College Space Center,'” Brandt said. “I was kind of dumbfounded, basically. And I said, 'OK, let’s do that. That’s kind of grandiose. Let’s really play it up.’”

The joke was funny because this was just a tiny, two-year college, with no engineering program. Getting into space was the last thing on the minds of these students; they were just trying to escape poverty. Next thing they knew, NASA was calling them up.

Not long after their first real rocket launch, Brandt got a phone call – from NASA.

“She introduced herself and said, ‘I didn’t know you were big enough to have a space center,’” he said. “And I, of course, choked and chortled and told her the story of what happened. And she said, ‘Be that as it may, you are doing what we want, and that’s to get underrepresented students involved in science, technology, engineering and math programs.’”

NASA would give them $5,000 a year for three years. It was enough to get them to take themselves seriously.