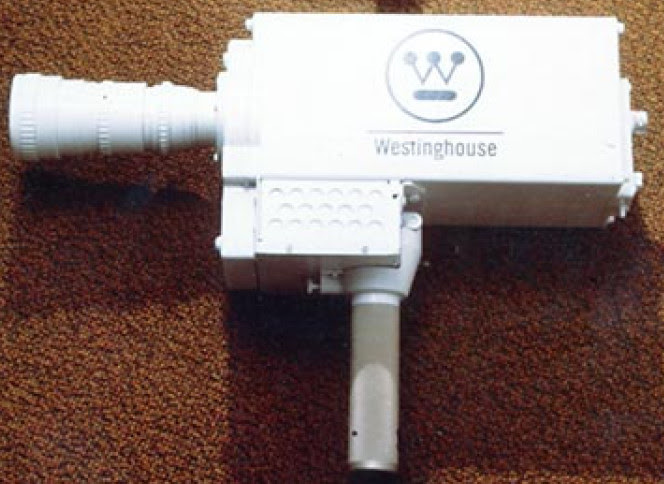 Pre-flight photograph of the color television camera used on the Moon during the mission of Apollo 12. This camera was developed by Westinghouse engineer James Justice, who passed-away this month. (Image Source: http://www.ninfinger.org/karld/My%20Space%20Museum/apollocams.htm#A12%20&%2014%20Color )

James W. H. Justice, who developed and designed the circuitry for the first color television camera used in space and on the Moon, passed-away on May 13 of cancer at age 89.

Mr. Justice was the second Westinghouse Electric Company engineer, who developed television technology for NASA's Project Apollo, to die within the last three months. Physicist Ernest Sternglass, who was instrumental in development of the television camera (black-and-white camera) which showed the first astronauts walking on the Moon during the mission of Apollo 11, died at age 91 on February 12. (Link to blog post obituary of Mr. Sternglass at the end of this blog post.)

The color television camera developed by Mr. Justice was first used in the Command Module during the Apollo 10 mission, the Moon landing “dress rehearsal” when the astronauts did everything except land on the Moon. During this mission, the Lunar Excursion Module (LEM) separated from the Command Module, while in lunar orbit, and came within 8.4 nautical miles / 15.6 kilometers of the lunar surface.

Apollo 12 was the first mission when this Westinghouse color television camera was used on the lunar surface. The camera worked well until there was an accident. About 42 minutes into the first Extra Vehicular Activity (EVA) on the Moon's surface by astronauts Alan Bean and Pete Conrad, Alan Bean inadvertently pointed the camera at the Sun, while preparing to place the camera on a tripod. The extreme brightness of the Sun burned-out the video pick-up tube rendering the camera unusable. When the camera was returned to Westinghouse's research labs in Pittsburgh, scientists were able to get an image on the section of the tube that had not been damaged. NASA instituted revised procedures, including the addition of a lens cap, to ensure this incident would not be repeated.

The 1969 Emmy Awards for Outstanding Achievement in Technical / Engineering Development were awarded by the National Academy of Arts and Sciences to NASA for the conceptual aspects of the Apollo color television camera and to Westinghouse for development of the camera.

On an Internet web page and in an hour-long video archived at a special legacy project web site, Mr. Justice describes how NASA asked not just for a color television camera for space, but the camera also had to transmit in color on a limited bandwidth and be accessible for normal, analog television reception in people's homes. (Link to web page and hour-long video near end of this blog post.)

Mr. Justice was a prolific inventor, and by 1969 he had already accumulated 22 patents. Interestingly, at one point General Electric (GE) was shocked to learn that one of their new color television developments (multiple programs transmitted over a single television channel) had already been invented by Mr. Justice ten years earlier! GE had to stop production because Mr. Justice owned the patent for the process.

Mr. Justice was born in England on 1925 June 2. He served as a navigator in a bomber command of the Royal Air Force during World War II. Mr. Justice attended St. John's College at Cambridge University and also North London Polytechnic.

When recruited by Westinghouse for the company's Research and Development Center in the Pittsburgh suburb of Churchill, he traveled from London with his wife and three children aboard the Queen Mary. He retired in 1987.