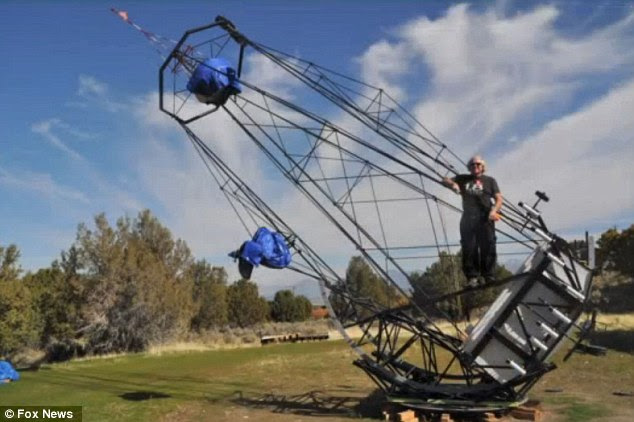 Late last year, a Utah truck driver constructed what is believed to be the largest amateur telescope in the world. Using a 70-inch mirror which had been built to be used on a Cold War spy satellite, Mike Clements, 51, built a telescope that rivals that of some professional astronomical observatories.

He obtained the mirror through an auction, as the mirror was not deemed suitable by the U.S. Department of Defense due to the fact that the edge was slightly chipped. The West Jordan, Utah resident constructed most of the rest of the telescope from materials purchased at big-box stores Lowes, Home Depot, and Wal-Mart.

Mr. Clements has named his telescope the "KH-12," which is the name of the spy satellite the mirror was originally designed for.

Mr. Clements readily admits he has no professional credentials in Astronomy. He simply came across the government-surplus mirror and felt it would help him complete his dream of building a huge telescope.

Some people told him that the huge mirror could not be adapted to an amateur telescope. However, a long-time friend, Steve Dodds who owns Nova Optical, helped him test the focal distance of the mirror. It turned-out the eyepiece lens would have to be 427 inches away from the mirror, hence the telescope structure, with a 29-inch secondary mirror, is 35 feet tall !

He purchased the 900-pound mirror in 2005, which he silvered himself; silvering of the large piece of glass was successful on the second try. It took about a year and a-half to construct the telescope, but Mr. Clements will not mention the total cost. The complete telescope weighs 3,000 pounds.

A group of amateur astronomers in Northern California, called Group 70, attempted to build a 70-inch amateur telescope, beginning in 1988. However, a decade later the project was shelved until they can raise additional funds.

Mr. Clements plans on using his huge telescope to bring Astronomy to the public. There are plans to take the telescope to public star parties, and perhaps even to several national parks.

Sources: The Salt Lake Tribune, KSTU-TV 13 Salt Lake City,
Glenn A. Walsh Reporting for SpaceWatchtower, a project of Friends of the Zeiss.

More on the 70-inch Amateur Telescope ---