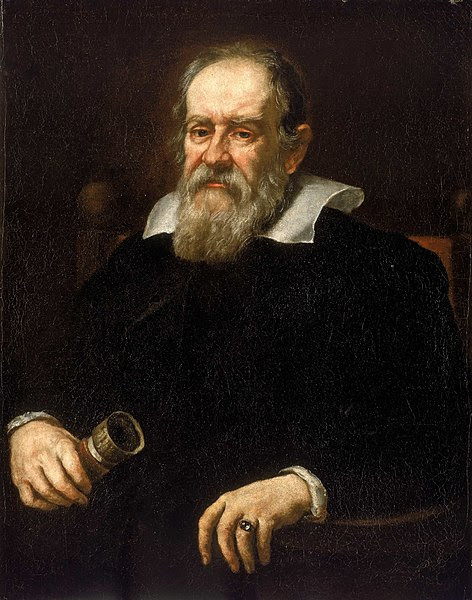 Today, Saturday, 2014 February 15, marks the 450th anniversary of the birth of one of history's most preeminent astronomers, Galileo Galilei. One of the first scientists to use a primitive telescope to look at objects in the sky was born 1564 February 15 and died 1642 January 8.

The Italian scientist was much more than an astronomer. He was also a physicist, mathematician, and philosopher who defended the Copernican model of heliocentrism, with the Sun at the center of the Solar System. From this defense, Galileo was found "vehemently suspect of heresy" by the Roman Catholic Church, which led to house arrest for the rest of his life after recanting his heliocentric views.

His accomplishments were many and varied ---

* Confirmation of the phases of Venus (similar to phases of the Earth's Moon).
* Discovery of the four largest natural satellites of Jupiter (named Galilean Moons in his honor).
* Observation and analysis of sunspots on the Sun.
* First observed the rings of Saturn, although his primitive telescope did not permit him a proper explanation of the phenomenon.
* First observed Neptune, but the brief observation did not permit him to understand it was a planet, although he did notice an unusual motion relative to the stars.
* First to correctly interpret the light and shadows on the Moon as lunar mountains and craters.
* First to realize that the Milky Way was really a multitude of stars packed so densely together to appear as a cloud without use of a telescope.
* First to see stars not visible to the naked-eye, including a double-star, Mizar in the Constellation Ursa Major.
* One of the first scientists to use a telescope to view celestial objects. The term "telescope" was coined by a Greek mathematician at a banquet where Galileo was inducted into the Accademia dei Lincei (Italy's first science academy).
* Invented a microscope. Again, the term "microscope" was coined for Galileo's invention by a fellow member of the Accademia dei Lincei.
* Invented improved military compass.
* Invented a thermometer, using the expansion and contraction of air in a bulb to move water in attached tube.

A theatrical play on the life of Galileo was part of a unique collaboration, a five-part, year-long Galileo Project, between Pittsburgh's original Buhl Planetarium and Institute of Popular Science and the Pittsburgh Public Theater in the Summer of 1981. "Galileo" by Bertolt Brecht (directed by J. Ranelli) was performed, from 1981 June 24 to August 2, in two neighboring venues - half the performance in one venue and the second half in the second venue.

The first venue was the theatrical stage in the Theater of the Stars of Pittsburgh's original Buhl Planetarium and Institute of Popular Science, the first permanent theatrical stage in a planetarium theater. Next-door, the second venue was the Hazlett Theater in Carnegie Hall (the world's first Carnegie Hall, which opened a year before the more famous Carnegie Hall in New York City), adjoining America's first publicly-funded Carnegie Library, which at that time was the home to the Pittsburgh Public Theater (since 1999, the Pittsburgh Public Theater has performed in the newer O'Reilly Theater, located in Downtown Pittsburgh's Cultural District).

In the mid-1980s, the author, Glenn A. Walsh, found a stage-prop used as Galileo's telescope in the play (as well as a stage-prop hat designed to look like a hat worn by a gentleman during Galileo's era) in a Buhl Planetarium storage room (which had once been used as a Sound Room for Buhl's 1939 state-of-the-art "talking exhibits," which used record turntables for the audio). From then-on, until the closure of The Buhl Planetarium and Institute of Popular Science building (a.k.a. Buhl Science Center) as a public museum in August of 1991, the Galileo telescope prop was displayed to the public in Buhl's Astronomical Observatory.

Galileo's name is prominently inscribed on the Indiana limestone exterior of the original Buhl Planetarium building, just below the outer planetarium dome, along with the names of other prominent astronomers such as Newton, Kepler, Tycho, Copernicus, Ptolemy, and Hipparchus. At the following link is a photograph of the Galileo name inscribed just below the outer dome of Pittsburgh's original Buhl Planetarium and Institute of Popular Science. (Image Source: Friends of the Zeiss; Photographer: Lynne S. Walsh): Link >>> http://buhlplanetarium2.tripod.com/Buhldome4.JPG

More on The Buhl Planetarium and Institute of Popular Science's Theater of the Stars:
Link >>> http://buhlplanetarium3.tripod.com/BuhlZeissII.htm

More on the Carnegie Free Library of Allegheny, along with the original Carnegie Hall:
Link >>> http://andrewcarnegie2.tripod.com/photoalbumAlleghenyReg.htm

Sources: Wikipedia.org , Glenn A. Walsh Reporting for SpaceWatchtower, a project of Friends of the Zeiss.