Should We Worry About Comet ISON ? 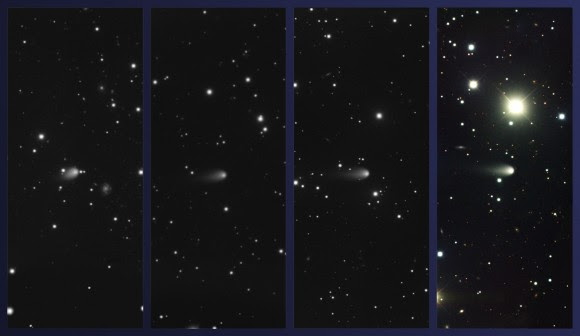 Should We Worry About Comet ISON ?

A recent public inquiry regarded the safety of Comet ISON, which is approaching the Sun and expected to arrive around Thanksgiving Day. The following is the response given to this question, by Glenn A. Walsh, Project Director of Friends of the Zeiss.

Should we worry about Comet ISON?


Do comets bring about solar storms when they come in near orbit with the sun?

In 1910, thousands of people were scared because the newspapers reported that the comet tail of Halley's Comet, which was partially composed of cyanide gas, would brush along the Earth's atmosphere. The fear was that, somehow, the comet's tail would poison our atmosphere. Consequently, hucksters made money selling "comet pills" that were supposedly an antidote to the poisons from the comet's tail.

It was all bogus. Even the scientists of the day knew that there was no danger from the tail of Halley's Comet. And, the scientists did try to publicize that fact in the newspapers. But scare-mongering news reports always receive more attention from the public than a scientific news article.

The same is true regarding Comet ISON. Today, viral YouTube and other social media and Internet posts are drowning-out the scientific news articles debunking the fear-mongering reports about Comet ISON.

Astronomers have been watching Comet ISON for many months. The only question is whether Comet ISON will become a bright, naked-eye comet when it comes close to the Sun, or whether it will fizzle-out as spectacle in the sky. They are still not sure, so time will tell.

Comets do not create solar storms. Indeed, if Comet ISON was completely swallowed-up by the Sun (which is still one possiblity), the Sun would hardly notice it. Comets are balls of ice, dust, and perhaps some small rocky pieces which are much smaller than the Earth.

Solar storms can occur at any time, but are usually more frequent during the peak of the 11-year sunspot cycle. The Sun is nearing the peak of the current sunspot cycle, so it would not be unusual for a solar storm to break-out at this time. However, if a solar storm does break-out at the time Comet ISON encounters the Sun, around Thanksgiving Day, that would simply be a coincidence.

The following are recent articles, from the Friends of the Zeiss' SpaceWatchtower Blog, regarding Comet ISON and the current sunspot cycle: