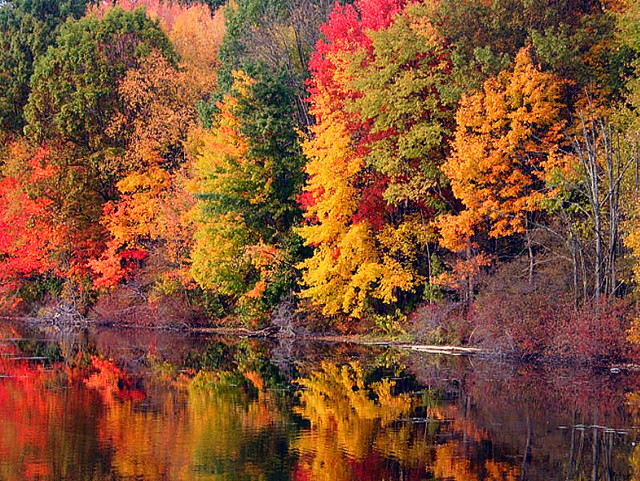 The colors of Fall are reflected in Lake Arthur of Moraine State Park,
in north suburban Pittsburgh. Moraine State Park is named for the glacial
moraines that cover its land. The Park marks the approximate, greatest
southerly extent of travel of the glaciers, during the last glacial period.
(Image Source: flickr.com )


The second half of October marks both the end of the growing season, as well as the peak in colorful Fall foliage in the Pittsburgh Quad-State Region: Western Pennsylvania, Northern West Virginia, Eastern Ohio, and Western Maryland. Although these came a few weeks earlier, in the higher elevations of the Allegheny Mountains portion of the region.

The annual change in color of leaves, from the ubiquitous greens of Spring and Summer to the yellows, golds, oranges, reds, crimsons, purples, and browns of many deciduous trees and shrubs in the Autumn, is one of the greatest visible effects of Astronomy on the natural world we live in. The increasing length of darkness, each day in Autumn, is the primary cause of this color change.

Planet Earth has a 23.44-degree tilt in its north-south axis to the plane of its orbit around the Sun. Consequently, as the Earth revolves around the Sun, a different portion of the planet each season of the year receives the most direct sunlight. The Northern Hemisphere receives the most direct sunlight in the Spring and Summer months, while the intensity of sunlight diminishes during the Autumn until the beginning of Winter, when the length and intensity of sunlight is at a minimum.

It is the long nights and the lower intensity of energy coming from the Sun, due to the Sun's lower angle in the sky, during the Autumn and Winter months, that prevents the leaves from producing the nutrients needed by the plant. Hence, the leaves do not keep their green color and eventually fall-off. When the length and intensity of sunlight increases in the Spring months, trees and shrubs grow new, green leaves to harvest the sunlight into energy for the plant's needs.

The production of chlorophyll in plants, during the Spring and Summer months when sunlight is more abundant, is used to manufacture food-sugars from sunlight through a chemical process known as photosynthesis. The chlorophyll pigment overwhelms other pigments in a plant's leaves; hence, the plant's leaves reflect a green color.

Plants prepare for the days when less sunlight will be available for food production by beginning to close-off the veins which carry fluids to and from their leaves. This a protective measure, to reduce the energy needs of the plant for the long Winter. Also, the tender leaves, in which the leave's fluids could easily freeze in sub-freezing temperatures, could hurt the plant and must be disposed-of. Hence, after the leaves change color, they fall off of the plant.

As days go by in the Fall with less intense sunlight available each day, chlorophyll production begins to slow down, stops, and eventually all chlorophyll is destroyed. Different species of trees and plants contain and produce different pigments, other than chlorophyll. Hence, when the chlorophyll is destroyed, the different pigments determine what colors will be unveiled in the leaves. The carotenoid pigment, which is always present in leaves, is then unmasked to show the yellow and gold colors of leaves, which remains pretty-much the same each year.

Weather, also influenced by the Earth's tilt on its axis and the amount of energy from the Sun received on different parts of the planet, has some additional effect on the intensity of pigment color in a leaf, each year, with temperature and moisture being the main influences.

Often the most brilliant displays of Fall color come when days are warm and sunny and nights are cool, but not below the freezing-point. In such days, chlorophyll continues producing sugars, but the closing of a leaf's veins traps these additional sugars in the leaves. This spurs the production of anthocyanin pigments, which results in leaves of dazzling red, purple, and crimson colors.

Although, if Autumn days are too warm, as we in the Pittsburgh region experienced in September, the leaves' veins may not close-off soon enough, and Fall colors will be slightly delayed or be less intense. A severe drought can also delay Fall colors. and, in some cases, result in leaves falling off branches prematurely.

Many areas of western and northern Pennsylvania, particularly in the Allegheny Mountains, have vivid displays of Fall color at this time of year. This is thanks to the astronomical effects of Earth, with the 23.44-degree tilt on its axis, revolving around the Sun..

More on the season of Autumn or Fall:
Link >>> http://en.wikipedia.org/wiki/Autumn