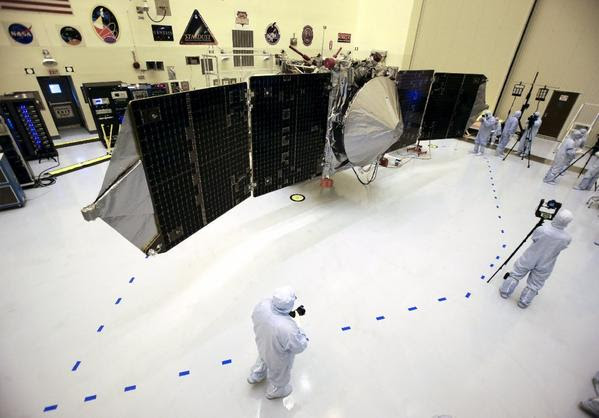 NASA's next Mars-bound spacecraft was cleared for launch in spite of the federal government shutdown. (John Raoux / Associated Press / September 27, 2013)

Planetary scientists are breathing a sigh of relief as NASA’s MAVEN mission to Mars has been cleared for takeoff. The Mars Atmosphere and Volatile EvolutioN mission, slated for launch as early as Nov. 18, had been put on hold after this week's government shutdown, raising fears that the spacecraft would miss the launch window and be grounded for years.

The MAVEN mission will explore the evolution of the Martian atmosphere, and will probe whether its cold, thin, dry shell of air was once thick and ideal for microbial life. In its elliptical orbit, it will swoop down to just 77 miles above the surface to taste each layer of the top of the atmosphere and then get a bird's eye view of the entire planet at its highest point, 3,728 miles above the planet.

MAVEN, set for launch between Nov. 18 and Dec. 7, will play a crucial role as a communications relay between Earth and the rovers Curiosity and Opportunity, Jakosky said. That’s a function currently carried out by two aging satellites, Mars Odyssey (launched in 2001) and the Mars Reconnaissance Orbiter (launched in 2005).

Had MAVEN not escaped the funding freeze, the team could have pushed a launch to Dec. 15 at the latest, about a week after the end of its official launch window, Jakosky said. But beyond that, Earth and Mars would have fallen out of ideal alignment.