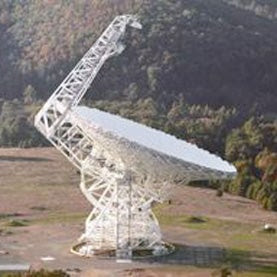 One year after a controversial recommendation to cancel its National Science Foundation (NSF) funding, the Green Bank Telescope in West Virginia, the world’s largest fully steerable radio telescope, is searching for new partners to help support its $10-million annual operating costs. In the face of these potentially life-threatening cuts, some additional sources of revenue have been found—but the big telescope’s future still hangs in the balance.

In August 2012 the NSF's Division of Astronomical Sciences Portfolio Review Committee issued a report (pdf) that suggested divesting the Green Bank Telescope (GBT) by 2017. The report, "Advancing Astronomy in the Coming Decade: Opportunities and Challenges," has been controversial: both the NSF’s National Radio Astronomy Observatory and the NANOGrav Collaboration (which uses GBT as one of its telescopes to observe pulsars to detect gravitational waves) issued responses, and a public comment forum filled with debate over the telescope’s future.

The uproar was inspired by the telescope’s capabilities. The GBT features a steerable 100- by 110-meter elliptical radio dish, making it the largest of its kind in the world followed by the slightly smaller 100-meter Radio Telescope Effelsberg in Germany and the 76-meter Lovell Telescope in England. The sheer size of the GBT’s collecting area allows it to detect faint radio waves from distant celestial objects. The steerable nature of the dish gives it vision of an unprecedented 80 percent of the sky, making it versatile for several types of research such as astronomy, astrochemistry and astrophysics. More recently, the telescope has been involved in the search for intelligent life.

The observatory offers “a level of sensitivity you simply cannot get with any other telescope in the world,” says Karen O’Neil, GBT site director. The telescope also grants thousands of hours of open-access time per year, giving researchers an opportunity to work with state-of-the-art equipment. Now that the GBT is searching for funding partners, this open-access time is likely to disappear, as the partners will own the operating time. “There’s a lot of concern in what effect that's going to have on the astronomical community,” O’Neil says.