Carnegie Library Bldg. May Be Reused by Children's Museum 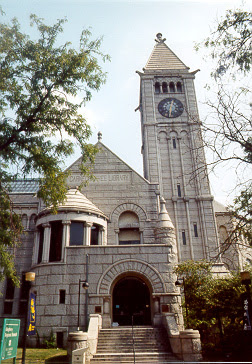 Photograph of the entrance to the former Allegheny Regional Branch
of The Carnegie Library of Pittsburgh. Originally known as the Carnegie
Free Library of Allegheny, it was the first publicly-funded Carnegie
Library in America. The Children's Museum of Pittsburgh is consideriing
reuse of the historic Library building, as they reused the historic Buhl
Planetarium and Institute of Popular Science building, next-door, in 2004.
(Image Source: Friends of the Zeiss; Photographer: Lynne S. Walsh)

The former Allegheny branch of the Carnegie Library of Pittsburgh could get a $20 million makeover as a venue for older youths.

The Children's Museum of Pittsburgh is considering whether to annex the 1890s-era library, which has been empty since lightning decimated its clock tower and the library system deemed the 45,000-square-foot facility too costly to keep.


In Allegheny Center, the library building is still home to the New Hazlett Theater and a city senior center. The landmark is one of the first of thousands of libraries constructed around the world in the late 19th and early 20th century with donations from Pittsburgh steel magnate Andrew Carnegie.

Glenn Walsh, a preservationist who attended a tour of the building this month, said the library space appeared untouched since 2006. He delighted at the ringing of the building's clock tower bells, which Siefert said dated to the 1890s and hadn't resounded for decades.

More on the history of Pittsburgh's original Buhl Planetarium and Institute of Popular Science, located next-door to the Carnegie Free Library of Allegheny:
Link >>> http://www.planetarium.cc/

More on Allegheny Square, location of the Carnegie Free Library of Allegheny and Buhl Planetarium and Institute of Popular Science, and the new Buhl Community Park at Allegheny Square:
Link >>> http://spacewatchtower.blogspot.com/2012/06/buhl-community-park-at-allegheny-square.html