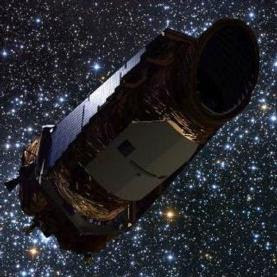 KEPLER TELESCOPE HUNTS FOR NEW MISSION: NASA's Kepler observatory is in search of a new mission now that its planet-hunting project has been hindered by pair of broken reaction wheels. One possibility for the telescope is to undertake a study of the interior physics of massive OB-type stars. Image: NASA/Ball Aerospace

NASA’s exoplanet-hunting telescope has always had an unsung talent for star physics on the side. Now that Kepler’s primary mission is compromised by broken reaction wheels on the spacecraft, some scientists hope to refocus it on an unprecedented study of the most massive stars in our galaxy, whose inner workings are the least well understood of all star classes.

During the four years since its launch, Kepler has discovered more than 3,000 exoplanet candidates, multiplying many times over the tally of known worlds beyond our solar system. But in July 2012 one of its four stabilizing reaction wheels failed, and then in May 2013 a second one gave up the ghost, leaving the spacecraft without the ability to point itself precisely toward a single spot in the sky.

The loss of the reaction wheels has effectively ended Kepler’s chances of discovering more low-mass planets, especially the golden ring prize of an Earth analogue. But NASA has hardly given up hope that the telescope can still do great things, and on August 2 the agency put out a call for ideas on how to use Kepler in its two-wheeled state. Among the dozens of proposals are plans to use the telescope to detect near-Earth asteroids, find Jupiter-size exoplanets, and monitor Neptune. And some stellar physicists say the change in Kepler’s fortunes has left the telescope in an ideal position to increase what is known about how large stars evolve.

When it was functioning normally, Kepler was unable to observe certain hot, massive stars called OB stars, because their extremely bright light would have washed out the relatively dim signals of planets. It did excel, however, at studying smaller stars using a method called asteroseismology. Akin to probing the internal dynamics of Earth by studying its seismic quakes, asteroseismology monitors starquakes, which show themselves as flickers in a star’s brightness, for hints about its internal structure. During its primary mission, Kepler could do this easily because it was already closely monitoring changes in stars’ brightness over time to search for periodic dimming caused by planets passing in front of the stars from Earth’s point of view.

Now, the somewhat shakier Kepler can’t point precisely enough to study the flickers of low-mass stars. Oscillations of larger stars, however, should create much stronger signals that should still be within the capabilities of Kepler to detect, says Conny Aerts, director of the Institute of Astronomy at the University of Leuven in Belgium, who is lead author of the proposal. Furthermore, such studies cannot be done well from the ground, because they require watching the same stars continuously for long periods of time in order to spot oscillations with periods of hours or days, and ground-based telescopes have to stop observing every time the sun comes up. “We need less good precision, but longer time scales, and that’s what Kepler with its two reaction wheels can bring,” Aerts says.