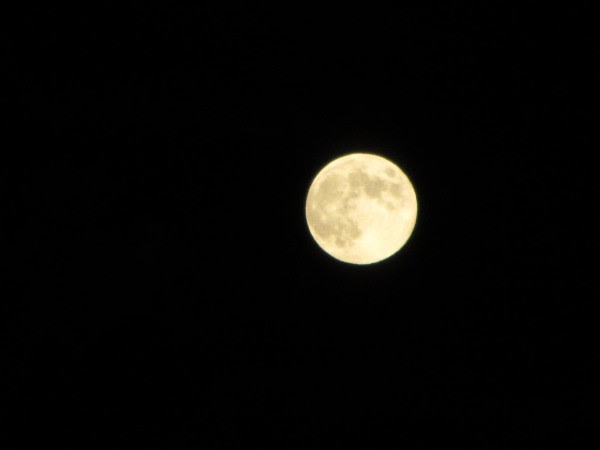 For the year 2013, the Harvest Moon will be the Full Moon of Thursday, September 19, at 7:13 a.m. EDT (11:13 Coordinated Universal Time). Interestingly, for viewers in the Pittsburgh region, the precise time of the Harvest Moon occurs one minute before local moonset !

Although for farmers eager to finish harvesting their crops, the bright Full Moon which shines on their farms for the several evenings closest to the Autumnal Equinox (which this year occurs Sunday, September 22 at 4:44 p.m. EDT, 20:44 Coordinated Universal Time) is considered the Harvest Moon.

The Harvest Moon is one of the signature astronomical events near the beginning of the Fall season, one particularly anticipated by farmers of both the past and the present. As many crops reach the time of harvest in late Summer and early Autumn, often the work of the harvest has to continue past sunset, which comes earlier and earlier each evening.

Nature has come to the rescue of these farmers, with a bright Full Moon, which arrives just around the time of sunset, that allows farmers to continue the harvest after the Sun's light has dissipated. Hence, long-age this Full Moon came to be known as the Harvest Moon.

For a similar reason, the Full Moon of October is often known as the Hunter's Moon, which allowed Native Americans to continue the hunt after sunset, to begin to store meat for the Winter. However, every few years the Harvest Moon occurs in October, shortly after the Autumnal Equinox. During those years, the Hunter's Moon occurs in November.

The reason for this is due to the ecliptic, the apparent path of the Sun, Moon, and planets through Earth's sky, which makes a narrow angle with the horizon this time of year. It is this narrow angle which provides that moonrise occurs around the time of sunset, near the time of the Full Moon of September (or sometimes October). Hence, several days appear to have a rising Full Moon.

Also, at this time of year when farmers need moonlight the most, the Harvest Moon appears larger and more prominent, due to the mysterious but well-known "Moon Illusion" that makes the Moon seem larger when it is near the horizon. And, while near the horizon, the Moon is often reddened by clouds and dust, creating the appearance of a large, rising red ball. Some even liken a rising Harvest Moon to a rising "Great Pumpkin," of "Peanuts" comic-strip fame!

In China and Vietnam, a popular harvest festival is celebrated on the date close to the Autumnal Equinox of the Solar Cycle, as well as close to the Full Moon Phase. This Mid-Autumn Festival /  Moon Festival dates back more than 3,000 years to Moon worship in China's Shang Dynasty.

Native Americans also called the Full Moon of September the Corn Moon, as Corn was one of their main crops. Sometimes the September Full Moon in the Northern Hemisphere is also known as the Fruit Moon.