The Legacy of the Space Shuttle

As each remaining orbiter of the shuttle fleet takes their final flight to museums around the nation, it is a fitting time to reflect on the legacy of these iconic space vehicles.
Citizens and visitors went outside in large numbers to watch the final flybys of these majestic birds that were the cornerstone of America's human spaceflight activities for 30 years. An entire generation has grown up knowing the Space Shuttle as America's only method of human access to space. Clearly this was an important passing, the end of an era. Many now believe that the end of the Shuttle era marks the end of U.S. leadership in human spaceflight.
As we close out the Space Shuttle era, we should reflect both on the amazing accomplishments of what they have achieved as well as the harsh lessons of the two tragic accidents. Most importantly, it is a time to reflect about the future, and why America should and is leading the world in human space exploration today and in the future!

By Lee Roop, The Huntsville Times 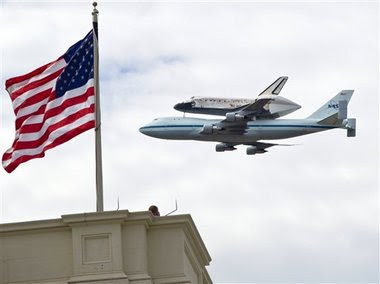 View full sizeHitching a ride on top a special NASA Boeing 747 jet, the space shuttle Discovery soars past Capitol Hill in Washington, after a flight from Cape Canaveral, Fla., Tuesday, April 17, 2012. Discovery, the world's most traveled spaceship, now becomes an attraction at the Smithsonian's National Air and Space Museum's Stephen F. Udvar-Hazy Center in Chantilly, Va., next to Dulles International Airport. (AP Photo/J. Scott Applewhite)
WASHINGTON, D.C. -- A top NASA official is praising an essay published online today by a former astronaut about the end of the space shuttle era and NASA's support of the commercial space industry. NASA Associate Administrator Lori Garver, a strong proponent of NASA's new direction, called the essay by Richard Garriot de Cayeux "wonderful" in a tweet today linking to the work posted on the Huffington Post website.