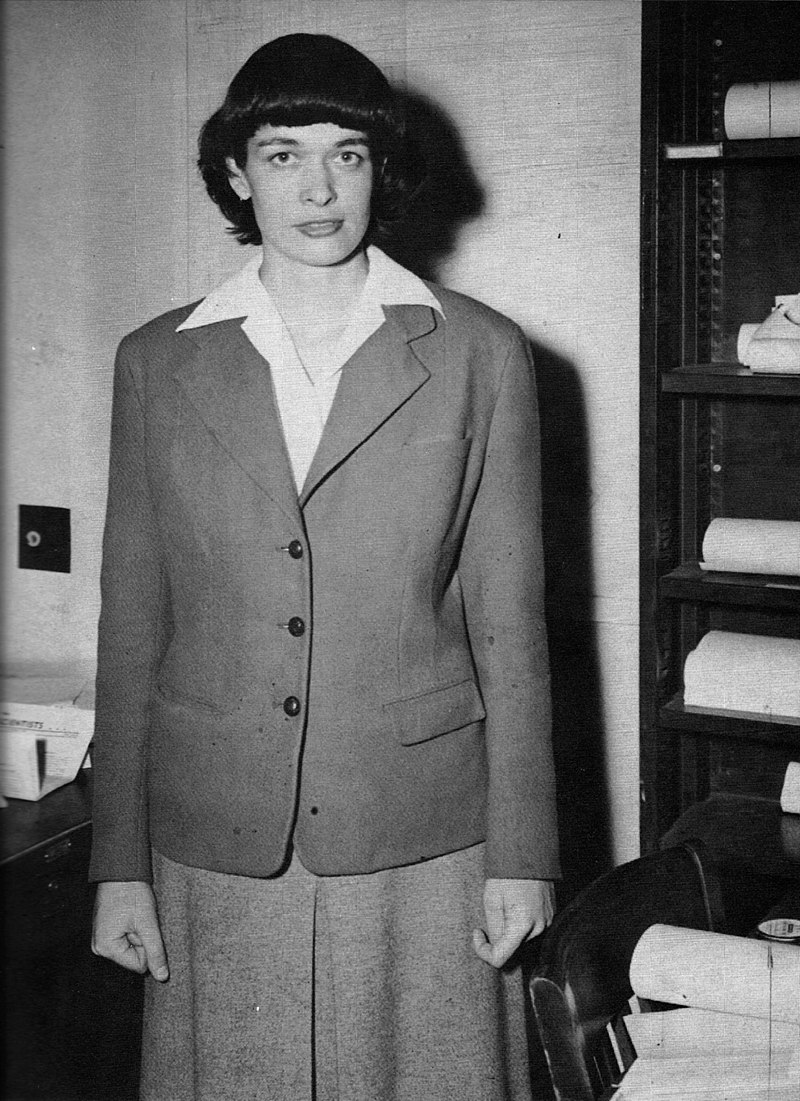 
By Glenn A. Walsh
Rep. 5orting for SpaceWatchtower

Today marks 75 years since the first use of nuclear weapons in war-time, the culmination of the American Manhattan Project (named for the Manhattan District of the U.S. Army Corp of Engineers). It was at 8:16 a.m. Japan Standard Time (JST) on the morning of 1945 August 6 [Aug. 5, 7:16 p.m. Eastern War Time (EWT) / Aug. 5, 23:16 Coordinated Universal Time (UTC)] that the United States dropped the first atomic bomb on Hiroshima, Japan.

One of the very few female scientists who worked on the Manhattan Project went on to become a researcher in high-energy physics, astrophysics, cosmology, and diatomic molecular spectroscopy.

Leona Woods, later known as Leona Woods Marshall Libby, was the youngest (at age 23) and only female member of Enrico Fermi's team at the University of Chicago that built and experimented with the world's first artificial nuclear reactor. During the experimentation, Leona Woods was instrumental in the construction and then utilization of Geiger counters for analysis. When the first nuclear reactor went critical on 1942 December 2, she was the only woman present.

She had been selected for the Manhattan Project due to her expertise in creating vacuums needed for boron trifluoride counters, for measuring neutrons and creating a nuclear chain reaction.

Leona Woods is considered the most accomplished of the few women working on the Manhattan Project. She had graduated high school in 1934 at age 14 and earned a B.S. degree in chemistry from the University of Chicago in 1938 at age 19.

After World War II, she became a fellow at Erico Fermi's Institute of Nuclear Studies at the University of Chicago. In 1957 after a separation from her husband, she went to work at the Institute for Advanced Study at Princeton University in Princeton, New Jersey; at the time she was a single mother. The next year she became a fellow at the Brookhaven National Laboratory on New York's Long Island.

At New York University, she became an associate professor of atomic and nuclear physics in 1962.

From 1964 to 1970, she was a research professor in astrophysics and cosmology, as well as high-energy physics, at the University of Colorado. She also became a staff member at the RAND Corporation, a position she maintained until 1976.

In 1966, she divorced John Marshall and married Nobel Laureate Willard Libby. Willard Libby won the 1960 Nobel Prize in Chemistry for his contributions to the team that developed radio-carbon-14 dating, a process which revolutionized archeology and paleontology.

In 1973, Leona Woods Marshall Libby joined her husband at the University of California at Los Angeles as a visiting professor of environmental studies, engineering, engineering archaeology, mechanical aerospace, and nuclear engineering. Like her husband, she was a strong advocate for food irradiation as a way to kill harmful bacteria; she supported relaxing regulations on the use of food irradiation.

Over her life-time, she published more than 200 scientific papers. This included papers and books on early atomic research and environmental issues, as well as astrophysics topics.

In 1982, she edited Willard Libby's papers and published, with Rainer Berger, The Life Work of Nobel Laureate Willard Libby. Her husband had died two years earlier.

A 1969 paper she wrote was titled, Creation of an Atmosphere for the Moon, which she wrote for the RAND Corporation. In 1980, she wrote The Upside Down Cosmology and the Lack of Solar Neutrinos. She also published a paper titled, Venusian Geography.

Her last paper, produced in 1984, was on quasi-stellar objects or quasars.

Leona Woods Marshall Libby always felt that developing the atomic bomb was necessary, particularly since the Germans were working on the same project. She was also very concerned with the realistic expectation of a great loss of American soldiers and sailors had an invasion of Japan been considered necessary.

Regarding the advancement of nuclear science, she once said, “You can’t stop it. How can you stop it? You’re going to tell a guy like [Muammar] Gaddafi, ‘Don’t buy that bomb from the Israelis,’ or wherever you’re going to buy it? You can tell him, and he’s going to do—I mean you cannot stop the wheels. That’s my view. And again, the do-gooders and the crying on shoulders, these guys have got blue-eyed optimism that is not useful.”

Source: Glenn A. Walsh Reporting for SpaceWatchtower, a project of Friends of the Zeiss.
Thursday, 2020 August 6.