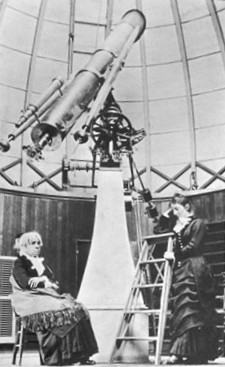 Photograph of Maria Mitchell (on left), circa 1877, in the Vassar College Observatory. America's first female, professional astronomer, she was also a leading 19th century women's suffragist. The telescope was a Fitz 12 and 3/8-inch refractor, the fourth largest telescope in the world when installed in 1863.
(Image Sources: Wikipedia.org, By Eva March Tappan - Heroes of Progress: Stories of Sucessful Americans (page 59), Public Domain, https://commons.wikimedia.org/w/index.php?curid=3257406)

Today, we celebrate the annual Women's Equality Day. But this year marks a special Women's Equality Day. Today is the centennial of the certification of the 19th Amendment to the United States Constitution, which prohibits the Federal Government and the states from denying the right to vote to U.S. citizens on the basis of sex. And, today we remember a leading women's suffragist of the 19th century, who was America's first female, professional astronomer.

Maria Mitchell, Professor of Astronomy at Vassar College and discoverer of Miss Mitchell's Comet, was our nation's first female, professional astronomer. She also helped found, and was the second President of, the Association for the Advancement of Women. And, she was an early and strong advocate for education for girls and young women, particularly science and mathematics education.

Born 202 years and 25 days ago (1818 August 1) in Nantucket, Massachusetts, Maria Mitchell was born to a father (William Mitchell) who was a school-teacher, school-principal, and amateur astronomer and a mother (Lydia Coleman Mitchell) who worked at a library. She was raised in the Quaker faith, which valued education for both boys and girls. Her father taught his ten children (she was the third-born) all about nature and astronomy, while her mother helped provide access to the two libraries where she was employed.

At age 12, Maria Mitchell helped her father use solar eclipse timing observations to calculate the position of their home. Two years later, sailors trusted her navigational calculations for their long whaling expeditions.

After completing a Unitarian school for young ladies at age 16, she became a teaching assistant at the school before opening her own school in 1835. In her school, she developed experimental teaching techniques, as well as admitting non-white students, a controversial move as the local public school was still segregated.

Beginning in 1836, Maria Mitchell spent 20 years as the first librarian of the Nantucket Atheneum. As the institution had limited hours, she also assisted her father with astronomical observations and geographical calculations for the U.S. Coast Survey.

She and her father used a 4-inch equatorial telescope, provided by the U.S. Coast Survey, mounted in a small observatory on the roof of the Pacific Bank Building; her father was also a bank cashier. They used the telescope to find nebulae and double stars, as well as producing latitudes and longitudes by calculating the altitudes of stars and the culminations and occultations of the Moon. She also continued her education.

Maria Mitchell started to practice the Unitarian faith in 1843. She then became a committed abolitionist, refusing even to wear clothes made from Southern cotton. She also started to gain an interest in the women's rights movement, befriending women's suffragists including Elizabeth Cady Stanton.

At the time, our young nation did not have much of a reputation, among European scientists, for scientific investigation and discovery. Hence, such a discovery by an American was nearly as uncommon as such a discovery by a woman. With her comet discovery, she soon became an international celebrity, being the subject of numerous newspaper and magazine articles.

When the comet discovery was officially recognized, on 1848 February 11, it became known as Miss Mitchell's Comet. Maria Mitchell was honored for the discovery at the Seneca Falls Convention, the first women's rights convention, which occurred on July 19 and 20 in 1848. She was considered an excellent role model for women in science.

Later in 1848, King Christian VIII of Denmark awarded Maria Mitchell a gold medal prize for the comet discovery. This award had been established by King Frederick VI to honor the “first discoverer” of telescopic comets, comets too faint to be seen with naked-eyes (one-power). The only previous women to discover comets were German astronomers Caroline Herschel and Maria Margarethe Kirch.

In 1849, Maria Mitchell began working as a “computer” for the U.S. Coast Survey at the U.S. Nautical Almanac Office. She tracked the movements of the planets, particularly Venus. The tables of planetary positions she compiled helped sailors in navigation.

In 1865, Maria Mitchell was appointed the first professor of the newly-founded (1861) Vassar Female College (now Vassar College) in Poughkeepsie, New York, located in the Hudson River Valley north of New York City, by college founder Matthew Vassar. Vassar Female College was only the second degree-granting institution of higher education for women in America, established soon after the 1855 founding of Elmira College, America's first degree-granting institution of higher education for women.

Maria Mitchell became the first Vassar Female College Professor, even though she, herself, did not have a college degree. During her tenure of more than 20 years, Vassar College enrolled more students in astronomy and mathematics than were enrolled in those subjects at Harvard University!

In addition to being Professor of Astronomy, she was also named the first Director of the Vassar College Observatory. The primary instrument of the observatory, a 12 and 3/8-inch refracting telescope produced by celebrated telescope-maker Henry Fitz, was the fourth largest telescope in the world when it was installed in 1863. It was exceeded in size only by 15-inch refractors at Harvard College and in Russia, and by a 13-inch Fitz refractor at the Allegheny Observatory (installed just two years earlier). Maria Mitchell was Observatory Director and Professor of Astronomy until 1888, about a year before her death.

While at Vassar College, she edited the astronomical column in Scientific American Magazine. She also wrote seven articles for Great Britain's Royal Society Catalog, and in Silliman's Journal (better known as the American Journal of Science, the longest-running U.S. scientific journal) she published three articles detailing her astronomical observations.

Maria Mitchell's unconventional teaching techniques included small classes and individualized attention to students, as well as not recording grades or absences. Lessons included mathematics and technology of the day. She realized the career options for female students were limited, at that time. However, she once said, “I cannot expect to make astronomers, but I do expect that you will invigorate your minds by the effort at healthy modes of thinking. When we are chafed and fretted by small cares, a look at the stars will show us the littleness of our own interests”.

With the Vassar College Observatory, Maria Mitchell started an astronomical research program including photography of the planets and their moons. Although she had started recording sunspots by eye-sight in 1868, she and her students started photographing sunspots daily in 1873. These were the first regular photographs of the Sun, which allowed her to hypothesize that sunspots were cavities on the Sun's surface, rather than clouds in the solar atmosphere as was previously conjectured.

She also studied nebulae, double stars, and solar eclipses. She developed theories regarding the orbiting of stars in double star systems and the influence of distance and chemical composition in star color variation.

For the solar eclipse of 1878 July 29, Maria Mitchell and five assistants took observations from Denver, using a 4-inch telescope. Her efforts led to the success of the Vassar College science and astronomy programs, with 25 of her students going on to be featured in Who's Who in America.

In 1873, after returning from a trip to Europe, Maria Mitchell joined the national women's movement and helped to found the Association for the Advancement of Women (AAW), dedicated to educational reform and the advancement of women in higher education. She was the second AAW president in 1875 and 1876. After her presidency, she formed an AAW special Committee on Science, which she headed until her death in 1889.

She taught at Vassar College until 1888, retiring, due to ill health, one year before her death; she never married. She and the one other female professor succeeded in gaining salary increases, when learning the greater salaries of their male colleagues.

Maria Mitchell was the first woman elected a Fellow of the American Academy of Arts and Sciences in 1848. In 1850, she joined the American Association for the Advancement of Science. She was among the first women elected to the American Philosophical Society in 1869. She received honorary degrees from Hanover College, Columbia University, and Rutgers Female College.

One of Maria Mitchell's favorite quotes: "We especially need imagination in science. It is not all mathematics, nor all logic, but it is somewhat beauty and poetry."


Source: Glenn A. Walsh Reporting for SpaceWatchtower, a project of Friends of the Zeiss.
Wednesday, 2020 August 26.