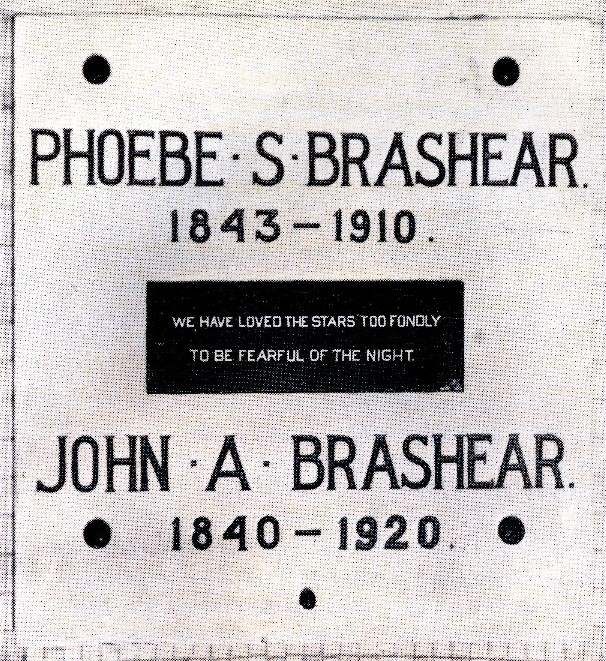 Name-plate on the John Brashear family crypt in the basement of the University of Pittsburgh's Allegheny Observatory.
(Image Sources: John Brashear Autobiography, Wikipedia.org, By John Brashear - A Man Who Loved the Stars: The Autobiography of John A. Brashear, Public Domain, https://commons.wikimedia.org/w/index.php?curid=4725142)

“WE HAVE LOVED THE STARS TOO FONDLY TO BE FEARFUL OF THE NIGHT.”

Today, many people throughout the world recognize that sentence as the epitaph on a crypt (in which the ashes of John Brashear, and the ashes of his wife Phoebe, are interred) in the basement of the University of Pittsburgh's Allegheny Observatory (which was directly below the 30-inch Keeler Memorial Reflector Telescope), for a man who was beloved in the late 19th century and early 20th century. This was John A. Brashear who passed-away from a form of food poisoning this day, one hundred years ago (1920 April 8) at the age of 79.

The epitaph is slightly paraphrased from a poem by Sarah Williams, “The Old Astronomer to His Pupil Tycho Brahe,” which John Brashear and his wife, Phoebe, both loved.

John Brashear was foremost one of the greatest producers of fine telescopes and precision scientific instruments of his era. A perfectionist, he produced telescopic and spectroscopic optics and other scientific apparatus of a precision unheard-of up until that time. At a time when scientific research was at the technical limits of its reach, Brashear optics and equipment greatly extended that reach.

His business started as the John A. Brashear Company in 1881. His telescopes, spectroscopes, and other scientific instruments were sold to astronomical observatories and other scientific installations and organizations throughout the world. Previously, he had been a millwright in a rolling steel mill on the South Side of Pittsburgh, building telescopes as a hobby in his spare time.

John Brashear was an astronomer who, at one time, was Acting Director of Pittsburgh's Allegheny Observatory. However, he refused a permanent appointment to the position.

He was an educator, who had limited post-secondary education himself—his six doctorates were all honorary degrees. However, he was Acting Chancellor of the Western University of Pennsylvania (predecessor of the University of Pittsburgh), again refusing a permanent appointment to the position.

And, he was an adviser to several major industrialists such as Andrew Carnegie, Henry Clay Frick, and Charles Schwab.

For Andrew Carnegie, he was part of the three-member Plan and Scope Committee which developed the Carnegie Technical Schools, now known as Carnegie Mellon University. He was also one of the original Directors of Pittsburgh's Carnegie Institute, including the Museums of Natural History and Art, the Music Hall, and the city's Carnegie Library system.

Although working hard to provide funding and facilities for the advancement of professional astronomy, John Brashear was insistent that the Allegheny Observatory display the wonders of the Universe to the common man. So, in addition to providing a public observatory as part of the Allegheny Observatory complex, he made sure the complex was easily accessible to the general public. He had the new Allegheny Observatory built in a new city park, at the extreme north end of the city, to avoid industrial smoke and light pollution, within one block of a major streetcar line.

He also insisted that a lecture hall be added as part of the complex, so the general public could learn more about astronomy.

John Brashear almost single-handedly raised the funds to build the new Allegheny Observatory. But there were obstacles, such as the Panic (recession) of 1893. In 1894, Andrew Carnegie advised him to wait “until coke sells at a dollar a ton and we will build the Observatory.”

By 1905, John Brashear was still short $65,000 for an observatory building which would include three telescopes: 30-inch Thaw Photographic Refractor, 30-inch Keeler Memorial Reflector, and the original 13-inch Fitz-Clark Refractor. In what may have been one of the first “challenge grants,” Henry Clay Frick promised to fund half of that amount, if John Brashear could raise the other half by October.

Due to his wife’s failing health, John Brashear was committed to his annual Summer vacation at Muskoka Lakes in Canada. From there, by long-distance correspondence, he raised $20,000. After returning to Pittsburgh, he raised the rest of the amount, and a wee bit more, by H.C. Frick’s deadline. In addition, the Carnegie-Illinois Steel Company, thanks to Company President Charles Schwab, donated all of the steel for the superstructure; Andrew Carnegie had sold his steel interests in 1901.

John Brashear received many honors later in his life, including six honorary degrees, fellowships in respected scientific and educational organizations, as well as invitations from all over the world to lecture and write for learned societies. He was beloved by the Pittsburgh community, as well as by astronomers throughout the world. In 1915, in recognition of John Brashear's 75th birthday, postcards, telegrams, and gifts were sent to him as the city and the nation celebrated his birthday. Everyone simply knew him as “Uncle John.” 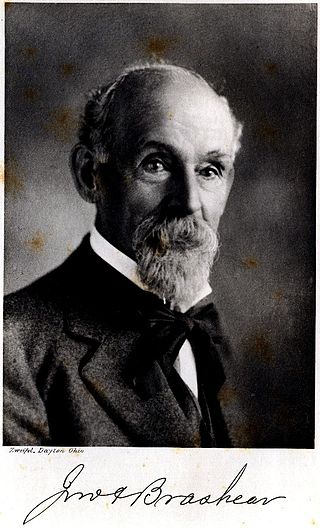 Source: Glenn A. Walsh Reporting for SpaceWatchtower, a project of Friends of the Zeiss.
Wednesday, 2020 April 8.