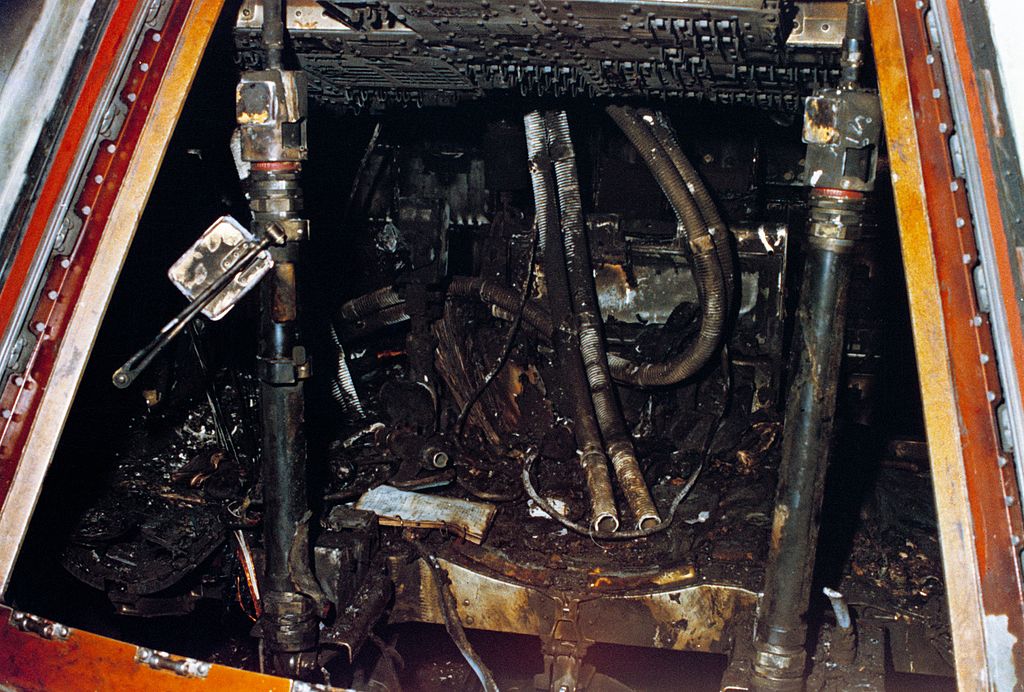 This photograph shows the charred remains of the cabin interior of the Apollo 1 space capsule, where a flash-fire killed three astronauts 50 years ago today (1967 January 27), in NASA's first tragedy of the Space Era.
(Image Sources: Wikipedia.org , By NASA - Great Images in NASA Description, Public Domain, https://commons.wikimedia.org/w/index.php?curid=203101 )

Fifty years ago today (on 1967 January 27), NASA experienced the first tragedy of the Space Era when three astronauts were killed in a cabin fire during a launch rehearsal test of their Apollo 1 space capsule. After nearly six years of crewed Mercury and Gemini space missions, this was to be the first Apollo mission, a rehearsal in low-Earth orbit, which would lead to landing men on the Moon before the end of the decade. The launch of Apollo 1 had been scheduled for 1967 February 21 at Cape Kennedy Air Force Station in Florida (now known as the Kennedy Space Center at the Cape's original name, Cape Canaveral).

On 1961 May 25, before a joint session of the U.S. Congress, President John F. Kennedy stated, "I believe that this nation should commit itself to achieving the goal, before this decade is out, of landing a man on the Moon and returning him safely to the Earth." The previous month, the Russians had launched the first human into space, Yuri Gagarin, who was also the first to orbit the Earth. On 1961 May 5, Alan Shepard had been the first American launched into space, during a short sub-orbital flight.

The launch by Russia of the first artificial satellite, Sputnik 1 on 1957 October 4, ahead of America's first planned launch of a satellite, had shocked the American public. And, now the Russians had succeeded in launching the first person into Earth orbit, further leading to fears that America was scientifically behind during these troubled times of the Cold War.

It took several years to reach the point where a mission to the Moon could be attempted. Between 1961 and 1963, six astronauts were launched into space on six rockets during Project Mercury. In 1965 and 1966 ten missions, each with a crew of two, were launched into space during Project Gemini. After Gemini 12, the final Gemini mission, splashed-down on 1966 November 15, the ambitious schedule of pre-lunar flights would begin the next February with the launch of Apollo 1 (the name Apollo 1 was chosen by the crew, but it was originally designated Apollo 204 or AS-204).

Apollo 1, as with all Apollo missions, would have a crew of three. The crew included Command Pilot Virgil I. “Gus” Grissom, Senior Pilot Edward H. White II, and Pilot Roger B. Chaffee.

Roger Chaffee was a newcomer, as Apollo 1 would be his first excursion into Outer Space. He had served as the “CAPCOM” (“Capsule Communicator” - Flight Controller at NASA's Mission Control Center in Houston) for both Gemini 3 and Gemini 4. He received his first spaceflight assignment, for Apollo 1, in 1966.

Apollo 1 was to be the first low-Earth orbital test of the Command and Service Modules of the Apollo spacecraft. The launch test on 1967 January 27 was considered quite important, as it would determine whether the spacecraft could operate on internal power, completely separated from ground systems. This test was not considered hazardous, since neither the spacecraft nor the rocket was fueled.

The astronauts entered the space capsule at 1:00 p.m. Eastern Standard Time (EST) / 18:00 Coordinated Universal Time (UTC), and the simulated countdown was held at 1:20 p.m. EST / 18:20 UTC when Lieutenant Colonel (USAF) Grissom noticed a strange odor (“sour buttermilk”) in the air circulating in his space suit. When no cause for the odor could be found, the simulated countdown resumed at 2:42 p.m. EST / 19:42 UTC; the accident investigation later determined that this odor had nothing to do with the fire.

Later on, a communication problem led to another hold in the simulated countdown at 5:40 p.m. EST / 22:40 UTC. Then, Lieutenant Colonel Grissom commented, “How are we going to get to the Moon if we can't talk between two or three buildings?”

The simulated internal power transfer had been completed by 6:20 p.m. EST / 23:20 UTC. However, even ten minutes later the countdown hold had continued at T-minus ten minutes.

Then, the astronauts noticed a momentary voltage increase. Nine seconds later, at 6:31:04.7 p.m. EST / 23:31:04.7 UTC, one of the astronauts exclaimed, over the Apollo 1 radio link, “Hey!” or “Fire!” Immediately afterward, another astronaut was heard to say, “(I've or We've) got a fire in the cockpit.” Another garbled transmission was then heard, quickly followed by a cry of pain.

It took five minutes for NASA workers to open the Apollo 1 hatch. By then, all three astronauts were dead. Once the hatch was opened, the dense smoke made it difficult, at first, to even find the astronauts. The astronauts' nylon space suits had been partially melted. Lieutenant Colonel (USAF) White had tried to open the space capsule hatch, per emergency procedures, but was unsuccessful due to the cabin's internal pressure.

At the direction of NASA Administrator James E. Webb, and with the approval of U.S. President Lyndon B. Johnson, NASA Deputy Administrator Robert Seamans (who had written and implemented a new mission failure investigation procedure following an in-flight failure, which included no deaths, during the mission of Gemini 8) established the Apollo 204 Review Board. This committee with nine members was chaired by NASA Langley Research Center Director Floyd L. Thompson and included Astronaut Frank Borman and spacecraft designer Maxime Faget.

Although all three astronauts had received third-degree burns in the fire, the investigation concluded that death had come by cardiac arrest caused by high concentrations of carbon monoxide (CO). It is believed the burns came after death. Asphyxiation occurred as soon as the fire melted the space suits and oxygen tubes; the atmosphere of the cabin was then lethal.

The investigation found five major causes of this accident:

When designing the Mercury spacecraft, NASA had rejected an Oxygen – Nitrogen mixed atmosphere, due to the risk of decompression sickness (“the bends”) and due to a 1960 accident when a test pilot was injured during a test of the Mercury capsule / space suit atmosphere system where a nitrogen-rich (and oxygen-poor) atmosphere was leaking into the space suit.

For Project Apollo, NASA decided that a pure oxygen atmosphere was safer, less complicated, and lighter in weight. In the publication, “Project Apollo: The Tough Decisions,” NASA Deputy Administrator Seamans wrote that NASA's single biggest error in judgment in engineering for the Apollo spacecraft was not to run a fire test, early-on, for the Command Module.

Following the accident, the Apollo Command Module was redesigned:

Today (2017 January 27), the families of the crew members of Apollo 1 will help dedicate a new exhibit, at the Kennedy Space Center in Florida, to the memory of the three astronauts who lost their lives in 1967. Although, the burned-out Apollo 1 space capsule is still maintained in storage, this new exhibit will display the spacecraft's hatch which prevented the astronauts from exiting the spacecraft after the fire began.

The new exhibit shows the three layers of the Apollo 1 hatch, as they appeared after the fire. Next to the original hatch is a display of the completely redesigned hatch, used on subsequent Apollo missions.

Apollo 1 was the first of three major tragedies which took the lives of NASA astronauts. On 1986 January 28, the Space Shuttle Challenger was lost after it exploded 73 seconds after launch. This flight had a crew of seven, including Christa McAuliffe, who had been designated as the first Teacher-in-Space. Upon re-entry into Earth's atmosphere, the Space Shuttle Columbia, also with a crew of seven, was lost when it disintegrated over Texas and Louisiana on 2003 February 1.

A near-tragedy was averted during the mission of Apollo 13. The explosion of an oxygen tank in the Service Module of Apollo 13 on 1970 April 13 crippled the spacecraft, while on its way to the Moon. The Moon landing was aborted, but the crew was able to return safely to Earth after flying around the Moon.


Three months after the Apollo 1 tragedy, the Russians experienced a space tragedy of their own. Cosmonaut Vladimir Komarov was killed, after re-entry from Earth orbit, when the parachute on his Soyuz 1 space capsule (which, at that time, was designed to be the Russian spacecraft to reach the Moon before the Americans) failed and he, in the space capsule, plunged to the ground on 1967 April 24. Unlike early American space missions which would land in the ocean, the Russian space missions always landed on solid ground.

Colonel Komarov was the Space Era's first human in-flight fatality, although he is not considered the first fatality in Outer Space. The three-man crew of Soyuz 11 are the only humans who have actually died in Outer Space, on 1971 June 30. Their space capsule depressurized during preparations for re-entry killing the crew, after a 23-day stay (at that time, a new record for human occupation in Outer Space) on the world's first space station, Salyut 1.

After losing the race to the Moon, the Russians began concentrating on occupying space stations in Earth orbit. The crew of Soyuz 11 were the only cosmonauts to board Salyut 1; a little earlier, the crew of Soyuz 10 rendezvoused with the space station, but had problems docking with it. No other cosmonauts ever visited Salyut 1, as the Soyuz spacecraft had to be redesigned after the Soyuz 11 accident. Salyut 1 ran out of fuel and was de-orbited and destroyed after being in orbit for six months.

As the Apollo 1 fire occurred in early evening on 1967 January 27, news of the tragedy did not reach the general public until mid-evening. Some Americans interested in the Space Program, in the Eastern and Central time zones, learned of the tragedy while watching a science-fiction television series on ABC-TV titled The Time Tunnel, which depicted two American scientists of 1968 teleported each week through time to a different time period, often encountering a historic event. That Friday evening, The Time Tunnel was interrupted by an ABC-TV News Bulletin announcing the accident and the death of three astronauts.

It was not until the launch of Apollo 7 on 1968 October 11, for an 11-day mission in low-Earth orbit, that NASA returned to crewed space flights, after the Apollo 1 accident. Two unmanned test flights in 1968 preceded Apollo 7: Apollo 5 on January 22 and Apollo 6 on April 4.

At the end of 1968, Apollo 8 became the first NASA mission where a crewed spacecraft left Earth orbit and entered orbit of another planetary body, the Earth's Moon. This mission included a memorable television broadcast by the astronauts, on Christmas Eve, when they read sections of the creation story from the Book of Genesis of the Christian Bible; at that time, this was the most-watched television program ever.

Photograph of Apollo 1 astronauts, in their space suits, in front of the rocket launch gantry for Apollo 1:
Link >>> http://spacewatchtower.blogspot.com/2017/01/astronomical-calendar-2017-january.html


Source: Glenn A. Walsh Reporting for SpaceWatchtower, a project of Friends of the Zeiss.
2017 January 27.