Iconic Radio Telescope to be Moth-Balled?

A very large and iconic radio telescope in West Virginia could be shuttered, with the possible loss of National Science Foundation (NSF) funding in the near future. The U.S. Government agency, which funds fundamental research and education in all non-medical fields of science and engineering, wishes to free-up money for newer projects and facilities.

One of the major facilities being considered for defunding is the Robert C. Byrd Green Bank Telescope of the National Radio Astronomy Observatory in Green Bank, West Virginia. Several other radio, solar, optical, and near-infrared telescopes in several locations such as Arizona, New Mexico, and Chile, including the huge radio telescope dish in Arecibo, Puerto Rico, are also being considered for divestment by the agency.


On October 19, the National Science Foundation announced that it would consider several alternatives regarding the future of the Robert C. Byrd Green Bank Telescope, as part of a Federal Environmental Impact Statement process. These alternatives range from continuing NSF funding to possibly moth-balling the telescope, or even possibly deconstructing the telescope. NSF developed the Robert C. Byrd Green Bank Telescope and owns the land where it sits. Last year, NSF sought public comment from scientists and the West Virginia community regarding the telescope's future. Thus far, no decision has been made.

The National Radio Astronomy Observatory (NRAO), with its largest facilities located in the small village of Green Bank in Pocahontas County, West Virginia, includes the world's largest fully-steerable radio telescope, the 328-foot / 100-meter Robert C. Byrd Green Bank Telescope. NRAO is also the home to several other radio telescopes, including a 140-foot / 43-meter telescope with an equatorial mount uncommon for most radio telescopes, three 85-foot / 26-meter telescopes forming the Green Bank Interferometer, a 40-foot / 12-meter telescope used for small-scale research by school students and educational organizations, and a fixed radio “horn” built to observe the Cassiopeia A radio source. At Green Bank there also is a reproduction of the original antenna, used by Karl Jansky at Bell Labs, which first detected radio interference that was determined to be radio waves from the early Universe, shortly after the Big Bang. 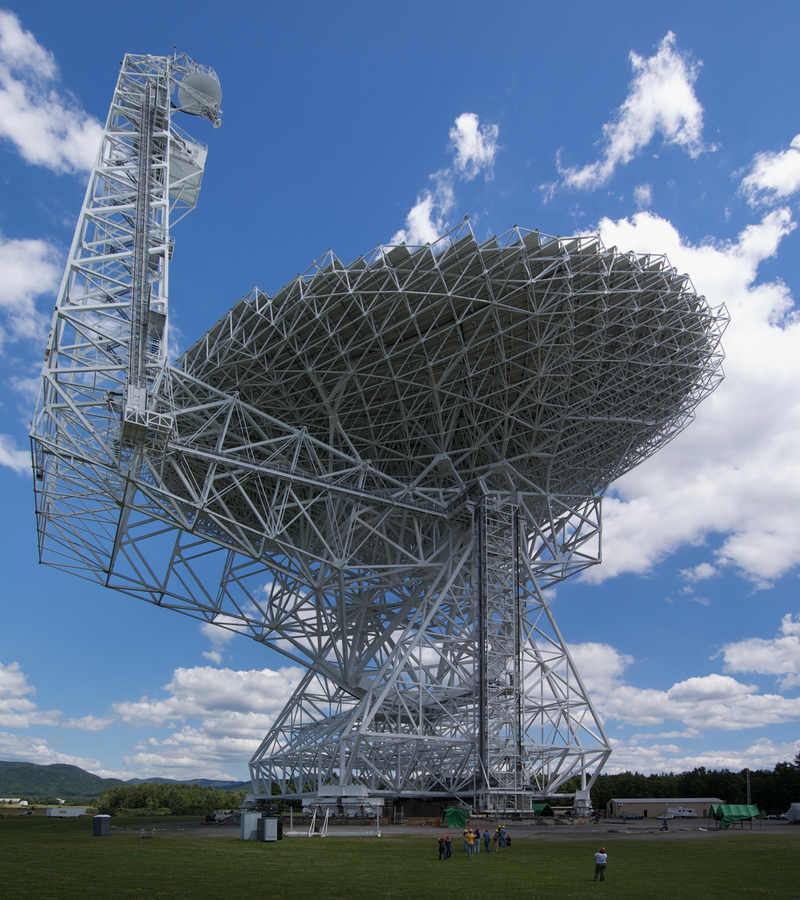 The Robert C. Byrd Green Bank Telescope, which was built in 2001, is also one of the newest such telescopes. Its construction was necessitated by the collapse of a 296.7-foot / 90.44-meter radio telescope, built in 1962, on 1988 November 15. Several discoveries have been made by the Robert C. Byrd Green Bank Telescope, in its short life, including the detection of three new millisecond pulsars in the globular cluster M-62 (2002), discovery of a large coil-shaped magnetic field in the Orion Molecular Cloud of the Orion Constellation (2006), and discovery of a large hydrogen-gas superbubble 23,000 light years away called the Ophiuchus Superbubble (2006). More recently, the telescope has discovered the most massive neutron star to-date and primordial and molecular clouds surrounding several galaxies. The telescope is also being used to scan the “quiet zone” radio spectrum of 1 to 10 GHz as part of the “Breakthrough Listen” project, which may someday detect radio signals from extraterrestrial civilizations.

The National Radio Astronomy Observatory is located within the National Radio Quiet Zone, an area where radio transmissions are severely restricted to aid scientific research and military intelligence. This 13,000 square-mile / 34,000 square-kilometer Zone includes a large part of eastern West Virginia, a smaller part of western Virginia, and a tiny part of Maryland. With a population of approximately 179, Green Bank, West Virginia is near the center of the National Radio Quiet Zone and is, by Federal law, a town without cellular telephones, wireless Internet routers, or any other types of radio transmitters.

What became a major controversy began when, in August of 2012, a National Science Foundation Astronomy Portfolio Review Committee chaired by Daniel Eisenstein of Harvard University recommended that the Robert C. Byrd Green Bank Telescope be defunded over a five-year period. The U.S. Congress did not choose to defund the NRAO in the Fiscal Year 2014 budget.

So, NSF continued funding the Robert C. Byrd Green Bank Telescope, but at a lower level. While they funded 95 per-cent of the telescope's $10 million operating cost in 2012, the funding for the Fiscal Year 2017 has been reduced to 66 per-cent.

While the NSF wants to use their very limited resources to fund newer projects and telescopes, astronomers argue that the Robert C. Byrd Green Bank Telescope is still a state-of-the-art facility, which has unique capabilities other telescopes cannot match. As the world's largest steerable radio telescope, the Robert C. Byrd Green Bank Telescope can cover 80 per-cent of the sky, while other large radio telescopes cannot cover half that amount of sky.

Astronomers also point-out that new research into gravitational waves and pulsars has invalidated the conclusions of the 2012 study. The Robert C. Byrd Green Bank Telescope is well-known for pulsar research and can make progress in the research now, without the need to wait for new facilities to come on-line.

The NRAO has started to find academic and private partners to help with the funding of the Robert C. Byrd Green Bank Telescope. These include West Virginia University, the North American NanoHertz Observatory for Gravitational Waves (NANOGrav), and the Breakthrough Listen project. However, these partners may not be able to fully compensate for a complete loss of NSF funding.

In addition to astronomical research, the NRAO inspires in the general public, particularly students, an interest in Astronomy and Science. More than 2,500 people tour the facility, or participate in mentorship or Summer internship programs, each year. For instance, groups of radio students from a Summer camp near White Sulphur Springs, West Virginia, Camp Shaw-Mi-Del-Eca, toured the facility in the 1960s and 1970s. Workshops and research training for West Virginia teachers are also provided.

The NRAO is also a major teaching and research tool of West Virginia University (WVU). Since 2006, WVU has produced 56 academic publications related to the Robert C. Byrd Green Bank Telescope, with 19 of them published just this-past year!

Benningfield, Damond. "Loud Sun." Blog-Post.
StarDate Radio Program 2017 Feb. 27.
In late February of 1942, British anti-aircraft radar stations were bombarded with a “noise” that they couldn’t filter out. Fearing that Germany had found a new way to jam the radar...
He concluded that the noise came from the Sun itself — the first confirmed detection of solar radio waves.
Link >>> https://stardate.org/radio/program/loud-sun

Source: Glenn A. Walsh Reporting for SpaceWatchtower, a project of Friends of the Zeiss.
2017 January 13