One of the early close-up views of Pluto from NASA's New Horizons spacecraft. Surprisingly, these mountains are much younger than expected, only about 100 million years-old, as opposed to the age of the Solar System: 4.56 billion years-old. And, it seems the mountains may still be growing,
(Image Sources: NASA, Johns Hopkins University Applied Physics Laboratory)
Links to more images at the end of this blog post. 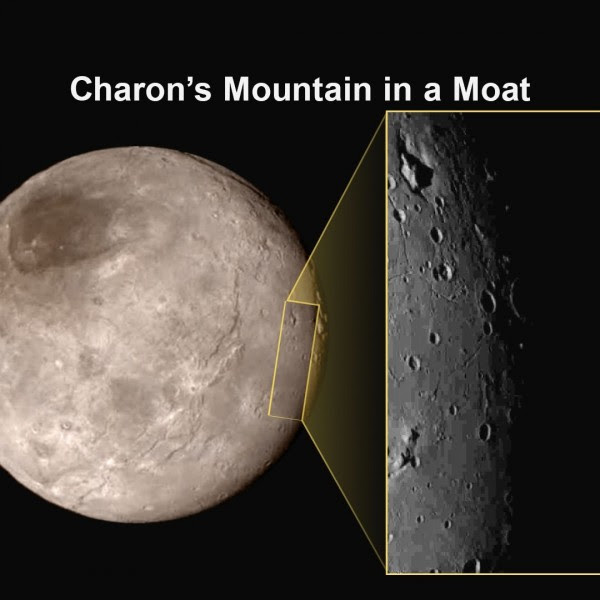 This is a photograph of Charon, the largest of Pluto's five moons. Some scientists really consider this the Pluto - Charon two-planet system, as both planetary bodies orbit around a common point located beyond both objects. In the upper left corner of the close-up image can be seen, what NASA refers to as, a "Mountain in a Moat." A huge mountain exists inside, what looks like, some type of crater, although it is still not known if it is an impact crater. The close-up image, from top-to-bottom, scans 390 kilometers / 240 miles.
(Image Sources: NASA, Johns Hopkins University Applied Physics Laboratory, EarthSky.org)
Links to more images at the end of this blog post.

On July 14, NASA completed the first, close-up survey of all major planetary objects in our Solar System. On this date, NASA's New Horizons spacecraft flew-by Pluto and its five moons, the last time NASA has had the opportunity to get first-time impressions and the first close-up photographs of one of the Solar System's major planetary bodies.

At the time of launch of the New Horizons spacecraft, 2006 January 19 from Cape Canaveral, Florida, Pluto was still considered the ninth and farthest known major planet from the Sun, in our Solar System. At that time the NASA goal was to, finally, have started the beginning of close-up exploration of all Solar System planets.

Later in 2006, the International Astronomical Union (IAU) reclassified Pluto as a Dwarf Planet, one of several such objects in the Kuiper Belt section of the Solar System. For both astronomers and the general public, this quickly became a very controversial action, which continues in controversy to this day.

The previous first fly-by of a planet occurred in August of 1989 when the Voyager 2 spacecraft, as the last part of the “Grand Tour of the Planets” (begun in the 1970s, due to a unique configuration of the outer planets that allowed one or two unmanned spacecraft to visit several planets) flew by the Planet Neptune. At that time, many planetaria and science museums, including Pittsburgh's original Buhl Planetarium and Institute of Popular Science (a.k.a. Buhl Science Center) held special observing programs for the public, often utilizing a satellite receiving dish to receive direct images from NASA from their satellite channel, “NASA Select.”

As with all of these “first fly-bys of a planet,” including the first successful fly-by of Mars which Mariner 4 accomplished exactly fifty years before the New Horizons fly-by of Pluto, the fly-by of Pluto has already required the rewriting of Astronomy and Planetary Science textbooks!

Vast icy, frozen plains exist next to Pluto's rugged mountains of ice, some mountains similar in height to North America's Rocky Mountains. Scientists did not expect that much complexity on such a small and cold world. The Pluto landscape has been described as, “just astoundingly amazing.”

The plains are located in the bright, heart-shaped area of Pluto. Like the 11,000-foot mountains, the plains, which are almost completely devoid of impact craters, are probably not much older than 100 million years-old. This is quite young for a planet that is likely 4.5 billion years-old. Yet, Jeff Moore, head of the New Horizons Geology team at NASA's Ames Research Center in California, said, “This could be only a week old for all we know.”

Dr. Moore was speaking at a Friday (July 17), NASA news conference, when the New Horizons spacecraft was already 2 million miles past Pluto and operating nominally. On July 14, New Horizons had flown within just 7,700 miles of Pluto's surface, after a journey lasting 9 and one-half years.

For now, scientists believe the fallout from icy volcanoes and / or geysers may be remaking the Pluto landscape and, thus, the reason for icy plains and the lack of major craters. Although Dr. Moore stressed that, as of now, they have no hard evidence of volcanoes or geysers on Pluto.

Pluto's atmosphere was also surprising, as the temperature of the atmosphere was cooler than expected. Even more surprising is the fact that part of the Pluto atmosphere acts as a long plasma tail, similar to a comet's ion tail. This "atmosphere tail" was measured as 77,000 to 109,000 kilometers / 48,000 to 68,000 miles long. Although Pluto is extremely far from the Sun, the solar wind still affects Pluto's atmosphere, causing this tail effect!

Like Pluto, scientists are surprised that Pluto's largest natural satellite, Charon, also seems to have a fairly-young surface in appearance, with few visible impact craters. Cliffs and troughs stretching about 600 miles suggest widespread fracturing of Charon's crust, perhaps due to geologic activity. Also seen was a canyon about 7-to-9 kilometers / 4-to-6 miles deep.

Although now well past the Pluto system, the New Horizons spacecraft will continue making observations of Pluto and its moons until January. And, it could take up-to 16 months to have all of the collected data received on Earth, due to the great distance between Earth and New Horizons and the slow data tranmission speed available at that great distance.

But, that still will not mean the end of the New Horizons mission. Now that New Horizons has entered the Kuiper Belt, scientists hope that the spacecraft can fly-by at least one more planetary object, which will likely be much smaller than Pluto. The two most likely candidates are objects known as Kuiper Belt Object 2014 MU69 and Kuiper Belt Object 2014 PN70. Both objects are about 1.6 billion kilometers / 1 billion miles beyond Pluto; at the present time, Pluto is about 4.8 billion kilometers / 3 billion miles from the Earth. Both objects are only about several dozen miles across, while Pluto has been measured by New Horizons as 2,370 kilometers / 1,473 miles in diameter.

A decision regarding which object to target for the next fly-by mission will probably be made by the Autumn. At that time, to minimize fuel consumption, a firing of the spacecraft's engunes will be necessary to aim for the targeted object.

Although, this will likely occur before the NASA bureaucracy is able to officially approve and fund the the extended New Horizons mission. The additional funding will be needed for staff and ground operations in support of New Horizons. The approval and funding is expected to come next year, with the new mission beginning in 2017 and the fly-by likely occurring in 2019.