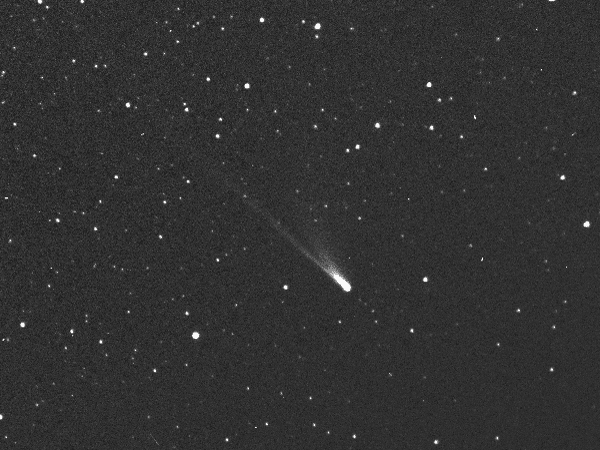 Comet 96P Machholz is the possible parent of the Delta Aquarids. This comet was discovered
on 1986 May 12 by Donald Maccholz. (Image Source: Wikimedia Commons)

Although the Perseid Meteor Shower, next month, is considered the best meteor shower of the year, the month of July does have its own meteor shower: the Southern Delta Aquariid Meteor Shower. But if you do not have a good location to view meteors, or the weather is inclement during the peak, a special web-cast will allow you to view this meteor shower on the Internet.

The Southern Delta Aquariid Meteor Shower, generally visible from mid-July to mid-August and particularly over this week, peaks on Wednesday Morning, 2015 July 29 at 11:00 a.m. Eastern Daylight Saving Time (EDT) / 15:00 Coordinated Universal Time (UTC). Of course, this peak will not be seen in the Western Hemisphere, so look for the most meteors on Tuesday and Wednesday evenings.

This year, the peak of the Delta Aquariids may be more difficult to see, as a Full Moon occurs just two days later (in fact, a so-called Blue Moon !). The additional reflected sunlight from the nearly-Full Moon (known astronomically as a Waxing Gibbous Moon) may wash-out some of the dimmer meteors, that would otherwise be visible. This second Full Moon in the calendar month of July, known by some as a Blue Moon, occurs at 6:43 a.m. EDT / 10:43 UTC on the last day of the month: Friday Morning, 2015 July 31.

At its peak, if you would have ideal observing conditions (without the extra moonlight), you may be able to see about 20 meteors an hour during the Southern Delta Aquariid Meteor Shower.

However, to see these meteors you need to be away from city lights, as artificial lighting can also drown-out the dimmer meteors. The best time to see any meteor shower is between local midnight and morning twilight, when the Earth is actually turning-into the meteor shower.

Binoculars and telescopes are not very useful for finding meteors. Meteors streak across the sky in a very short period of time, too short to aim binoculars or a telescope. So, the best way to view a meteor shower is to lie on the ground, in an area with a good view of the entire sky (with few obstructions such as buildings, trees or hills), and keep scanning the entire sky.

Meteor showers appear to emanate from a radiant point in the sky. For the Southern Delta Aquariid Meteor Shower, the radiant appears to be the Star Delta Aquarii, the brightest star in the Constellation Aquarius. However, you should not, necessarily, be looking only at Aquarius, when looking for meteors in this shower. Meteors can appear in any part of the sky at any time.

Of course meteor showers, like all celestial observations, are weather-permitting. If the weather in your area does not permit direct viewing outdoors of this meteor shower, it can be viewed during a special web-cast on the Internet.

However, do not expect to see as many meteors during an Internet web-cast. By necessity, a web-cast video camera can only aim at one part of the sky at a time. However, you are likely to see more meteors with your own eyes when you can scan over the entire visible sky, outside, during a meteor shower event.