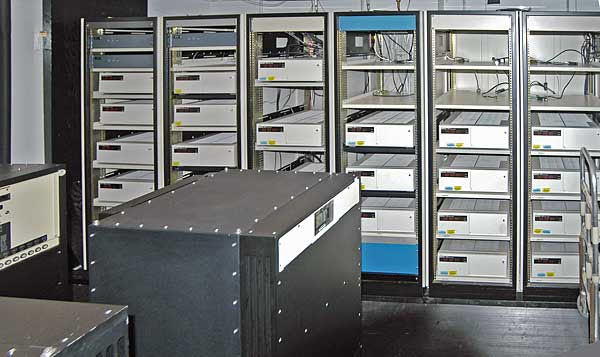 The Master Atomic Clock ensemble at the U.S. Naval Observatory in Washington DC, which
provides the time standard for the U.S. Department of Defense and provides precise time for
the general public at: Link >>> http://tycho.usno.navy.mil/cgi-bin/timer.pl
(Image Source: Wikipedia.org )

What time is it? The answer, no matter what your initial reference may be — a wristwatch, a smartphone or an alarm clock — will always trace back to the atomic clock.

The international standard for time is set by atomic clocks — room-sized apparatuses that keep time by measuring the natural vibration of atoms in a vacuum. The frequency of atomic vibrations determines the length of one second — information that is beamed up to GPS satellites, which stream the data to ground receivers all over the world, synchronizing cellular and cable networks, power grids and other distributed systems.

Now, a group at MIT and Draper Laboratory has come up with a new approach to atomic timekeeping that may enable more stable and accurate portable atomic clocks, potentially the size of a Rubik’s cube. The group has outlined its approach in the journal Physical Review A.

While chip-sized atomic clocks (CSACs) are commercially available, the researchers say these low-power devices — about the size of a matchbox — drift over time, and are less accurate than fountain clocks, the much larger atomic clocks that set the world’s standard. However, while fountain clocks are the most precise timekeepers, they can’t be made portable without losing stability.

The most accurate atomic clocks today use cesium atoms as a reference. Like all atoms, the cesium atom has a signature frequency, or resonance, at which it oscillates. Since the 1960s, one second has been defined as 9,192,631,770 oscillations of a cesium atom between two energy levels. To measure this frequency, fountain clocks toss small clouds of slow-moving cesium atoms a few feet high, much like a pulsed fountain, and measure their oscillations as they pass up, and then down, through a microwave beam.

Instead of a microwave beam, the group chose to probe the atom’s oscillations using laser beams, which are easier to control spatially and require less space — a quality that help in shrinking atomic clock apparatuses. While some atomic clocks also employ laser beams, they often suffer from an effect called “AC Stark shift,” in which exposure to an electric field, such as that produced by a laser, can shift an atom’s resonant frequency. This shift can throw off the accuracy of atomic clocks.

To avoid this problem, most standard fountain clocks use microwave beams instead of lasers. However, Kotru and his team looked for ways to use laser beams while avoiding AC Stark shift.

In laser-based atomic clocks, the laser beam is delivered at a fixed frequency and intensity. Kotru’s team instead tried a more varied approach, called Raman adiabatic rapid passage, applying laser pulses of changing intensity and frequency — a technique that is also used in nuclear magnetic resonance spectroscopy to probe features in individual molecules.

“For our approach, we turn on the laser pulse and modulate its intensity, gradually turning it on and then off, and we take the frequency of the laser and sweep it over a narrow range,” Kotru explains. “Just by doing those two things, you become a lot less sensitive to these systematic effects like the Stark shift.”

In fact, the group found that the new timekeeping system suppressed the AC Stark shift by a factor of 100, compared with a conventional laser-based system.