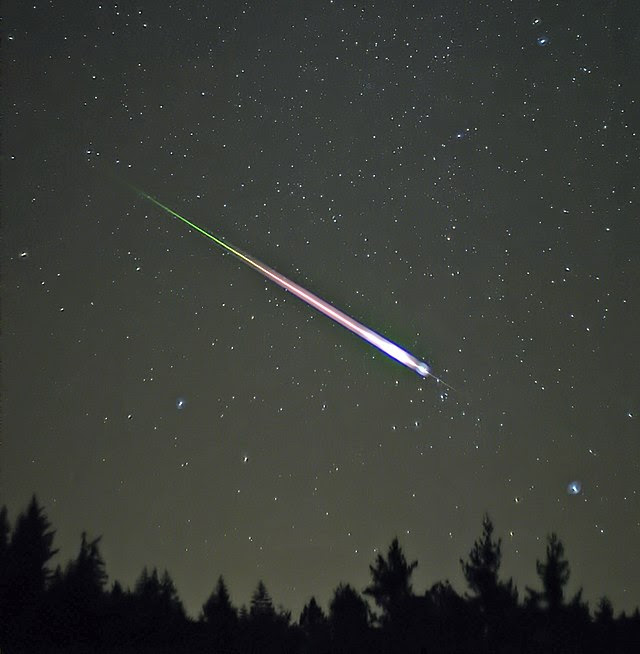 Photograph of a meteor during the 2009 Leonid Meteor Shower. (Image Source: Wikipedia.org )

The annual Leonid Meteor Shower peaks tonight, and skywatchers could be treated to 10 to 15 meteors per hour, weather permitting. Of course, with the polar vortex making an early visit to much of the country, sky conditions may not be optimal for skywatching  tonight.

Some people may decide it is just too cold to look for meteors tonight, even if skies are clear. In the Pittsburgh region, the low temperature is predicted to be +13 degrees Fahrenheit / -10.6 degrees Celsius, Monday night--early Tuesday morning. Also, in Pittsburgh winds are predicted to come from the west at 15 to 20 miles-per-hour / 24 to 32 kilometers-per-hour, with possible wind gusts up to 30 miles-per-hour / 48 kilometers per hour; predicted wind chill temperatures could reach 0 degree Fahrenheit / -18 degrees Celsius. And, considering that Pittsburgh is only about 75 miles / 121 kilometers north of the Mason-Dixon Line, areas of the country further north will likely be even colder.

However, if your sky is clear tonight, and it is not too cold, the best time to view meteors is between local midnight and dawn. While the actual meteor shower peak this evening is 6:00 p.m. EST / 23:00 UTC, it is always best to look for meteors after local midnight, when the Earth is actually rotating into the meteor shower.

Meteors from the Leonid Meteor Shower emanate from remnants of Comet Tempel-Tuttle. Leonid Meteor Storms occur once each 33 years (the last one was in 2009), when many meteors are visible. Other years, such as this year, the peak rate of meteors would be about 10 (to possibly 15) meteors per hour, under ideal conditions.

The Leonids are so named because most meteors appear to radiate from the Constellation Leo the Lion. However, during any meteor shower, meteors can appear in any part of the sky at any time.