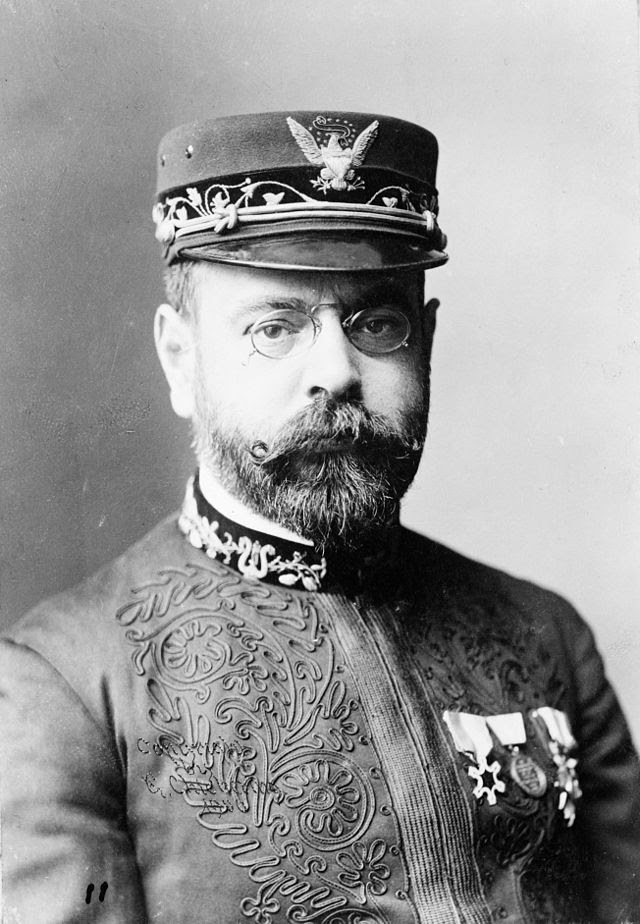 An admirer of a rare astronomical event, the Transit of Venus, would celebrate the 160th anniversary of his birth today (2014 November 6). Famous American composer John Philip Sousa was born 1854 November 6. He passed-away at the age of 77 on 1932 March 6.

John Philip Sousa composed the Transit of Venus March, in anticipation of the rare Transit of Venus on 1882 December 6. The stirring march was planned to be first played before the 1882 event, during the unveiling of a statue of Joseph Henry, the first Secretary of the Smithsonian Institution. Mr. Henry had served on the U.S. Transit of Venus Commission. However, the unveiling ceremony did not occur until 1883 April 19.

The Transit of Venus March was not popular and was pretty-much ignored for a century. A flood destroyed Sousa's personal copies of the music.

An avid follower of Astronomy, John Philip Sousa wrote a total of four marches regarding the heavens.

In 1920, John Philip Sousa also wrote Transit of Venus, one of three novels he penned. The novel surrounded a group of divorced men who took a fictional trip to the coast of Africa to watch the 1882 Transit of Venus.

Similar to a Solar Eclipse, a Transit of Venus occurs when the Planet Venus appears, from the vantage point of an observer on Earth, to move directly across the disk of the Sun in the sky. And, like a Solar Eclipse, it is very, very dangerous to look at such an event unless one has the proper training and the special equipment to do so safely. Otherwise, viewing such an event with a telescope, binoculars, or any other optical event could cause blindness instantly!

Friends of the Zeiss provided the only public observing event of the early-morning 2004 Transit of Venus in the City of Pittsburgh, on the observation deck of The Duquesne Incline on Mount Washington. A similar 2012 event was clouded-out in Pittsburgh, but Friends of the Zeiss and the Mount Lebanon Public Library did show the event to the public via a live Internet web-cast.

The Planet Mercury is the only other planet in our Solar System which can transit the Sun, from Earth's perspective.  Only planets closer to the Sun, than the planet where the observer is located, can have a transit event.

More on the Transit of Venus: Link >>> http://en.wikipedia.org/wiki/Transit_of_Venus

More on the Transit of Venus Viewed in Pittsburgh in the 21st Century:
Link >>> http://venustransit.pghfree.net/

Safe Way to View a Solar Eclipse or Eclipse of the Sun:
Link >>> http://andrewcarnegie.tripod.com/solflyer2.htm