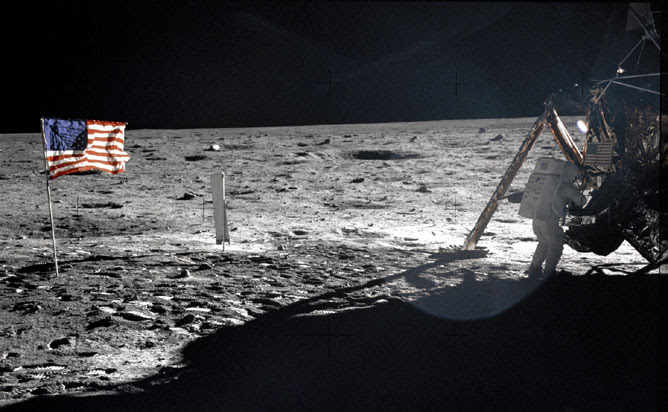 The American Flag mounted at Tranquility Base on the Moon, after the landing of Apollo 11.
(Image Source: NASA)

At the moment of this blog post, 45 years ago, man first landed on another planetary body, the Earth's Moon. On Sunday Afternoon, 1969 July 20 at 4:17:40 p.m. EDT / 20:17:40 Coordinated Universal Time, the Lunar Excursion Module (LEM) named "Eagle," which included American Astronauts Neal Armstrong and Buzz Aldrin, landed in the Moon's Sea of Tranquility, with only 25 seconds of fuel left.

Upon landing, Neal Armstrong announced, "Houston, Tranquility Base here. The Eagle has landed." Charles Duke, the CAPCOM (Capsule Communicator in the Johnson Space Flight Center in Houston). replied, "Roger, Twan— Tranquility, we copy you on the ground. You got a bunch of guys about to turn blue. We're breathing again. Thanks a lot."

The mission schedule called for the lunar astronauts to have a five hour sleep period, before preparing for walking on the Moon, due to the hectic schedule they had followed for landing the LEM on the Moon. However, both astronauts chose to forgo the sleep period, as they felt they probably could not get to sleep anyway.

Originally, the first walks on the Moon, by the two astronauts, had been scheduled for the early morning hours, North American time, of Monday ("Moonday" - the day of the week actually named for the Moon), July 21. However, with the elimination of the early sleep period, the astronauts started immediately to prepare for stepping onto the lunar surface. This eventually allowed the first steps on the Moon to be seen on live television throughout the world, at the end of the Sunday evening prime-time television period in the Eastern Time Zone of North America (and even earlier for the rest of the United States), instead of during the middle-of-the-night in North America as was originally scheduled.

There is some debate (as described in news articles listed below in "Related Blog Posts") as to whether Neal Armstrong's now famous quote said "one small step for man" or "one small step for a man." However, there was no doubt in the minds of millions of television viewers on Earth (the television audience for this event has been estimated to be at least 600 million, worldwide) that two Americans had walked on the Moon.

On 1969 July 20, the Moon was a waxing crescent phase, with 31 percent of the Moon's visible disk illuminated. The lunar phase of First Quarter did not occur until July 22 at 8:10 a.m. EDT / 12:10 UTC. Of course, the Sea of Tranquility, where the Apollo 11 LEM landed, was within this 31 percent of the illuminated Moon, as viewed from Earth.

Photograph of Astronaut Neal Armstrong about to step on the Moon for the first time, from the live television broadcast:
Link >>> http://spacewatchtower.blogspot.com/2014/07/astronomical-calendar-2014-july.html

The Historic Mission of Apollo 11, Man Walks on the Moon for the First Time
A Personal Remembrance From 40 Years Ago By Glenn A. Walsh (2009 July):
Link >>> http://buhlplanetarium2.tripod.com/bio/Apolloremembrance.htm