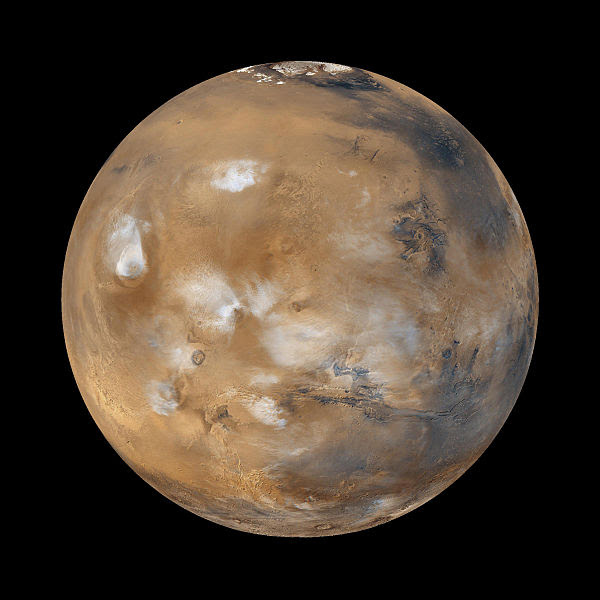 This month is the best time to look for the planet Mars in the night sky. It will be visible practically all night long for most of the month, as well as the red planet's appearance in April being the largest and brightest for the next two years. In fact, right now Mars is the third brightest object in the night sky, just behind the Moon and Jupiter, respectively.

In relation to the Earth, the planet Mars reaches opposition today at this hour (Tuesday, 2014 April 8 at 5:00 p.m. EDT / 21:00 Coordinated Universal Time), when the speedier Earth flies between Mars and the Sun, as both planets revolve in their respective orbits around the Sun. At the time of opposition, Mars has a visual magnitude of -1.5, and the Martian disk will appear as large as 15.2" in  the sky (just a wee-bit larger than the 13.9" disk seen at the height of the 2012 close apparition of Mars).

Being farther from the Sun, Mars takes 687 Earth days  (1.8809 Earth years, or 1 year, 320 days, and 18.2 hours) to make one complete orbit of the Sun, in essence the duration of the Martian year. Thus, the Earth routinely passes Mars, in their respective orbits, whenever Earth and Mars are close.

On average, Earth and Mars come closest every two years. The next time Mars is near the Earth will be in May of 2016.

Next week, on April 14 at 9:00 a.m. EDT / 13:00 UTC, Earth and Mars will be at their very closest for 2014. At that time Mars will be only 57 million miles from the Earth. The time of opposition and the time of closest approach to Earth differ due to the elliptical nature of both planets' orbits and the fact that Mars is nearing perihelion (closest approach to the Sun) while the Earth is heading for aphelion (farthest distance from the Sun) on July 4.

On April 14 at 2:00 p.m. EDT / 18:00 UTC Mars will be in conjunction with the Moon, appearing 3 degrees north of the Moon at that time. Of course, both Mars and the Moon will be below the horizon for Western Hemisphere observers, although the Moon and Mars will still be rather close that evening.

The month of April will be the best time to view Mars, when it will appear bigger and brighter than usual, as Earth is closer to the red planet this month than it has been in six and one-half years. It was back in December of 2007 that was the last time that Earth approached this close to Mars.

However, this year Mars will not be as close as in other years. Mars' orbit around the Sun is more lopsided than the solar orbit of Earth. So some years, such as in 2014, Mars is farther from the Sun, and hence farther from the Earth. At other biennial oppositions of Mars, the planet is closer and appears even larger and brighter.

As it is called the red planet, Mars does appear in the sky as a small dot with a reddish-orange tint, the coloring caused by dust in the planet's atmosphere. The planet will appear as a dot with a much steadier light (except when it appears near the horizon, when just rising or about to set), larger than the twinkling stars which are pinpoints of light due to their much greater distance from the Earth. Observers with good eye-sight may be able to notice that Mars appears a little larger  in the sky, than at other times of the year.

While the Martian year is nearly two Earth years, despite Mars' smaller size the Martian day is just a little longer than the Earth day at 24 hours, 39 minutes, and 35.244 seconds.