This Weekend’s Lyrid Meteor Shower: How to See It 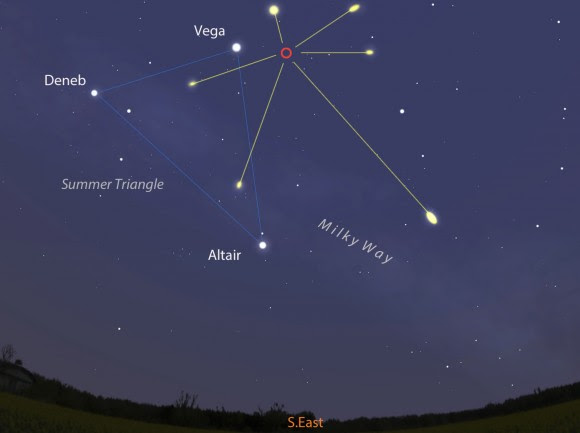 Lyrid meteors will appear to radiate (red circle) from a point near the bright star Vega in the constellation Lyra. This map shows the sky facing southeast around 3:30 a.m. April 22 – around the time of meteor maximum. Stellarium

Feeling a little meteor-starved lately? Me too. It’s been a meteor shower desert since the Quadrantids of early January. That’s about to change. This weekend brings the celestial version of April showers with the annual appearance of the Lyrids.

The Lyrids ding the bell at maximum strength this weekend April 21-22 (Sunday night-Monday morning in the Americas) hurtling meteors at the modest rate of 10-20 per hour from a point in the sky not far from bright Vega in the constellation Lyra. While some showers spread their meteor crumbs over several days, the Lyrids’ peak activity lasts less than a day. The western hemisphere – particularly the western half of North America – is favored this year.

There will be a small price to pay for the show. The Lyrid radiant, the point in the sky from which the showers members radiate, rises in the east rather late – around 10:30 p.m. local time. Then there’s the bright gibbous moon, which has a habit of drowning out fainter stars and meteors alike. That makes the best time for viewing the shower after moonset or around 4 a.m. Monday morning. Since dawn begins about 5, you’ll have one good hour. That’s plenty of time to snag at least a few flaming motes of Comet Thatcher.

Like most meteor showers, the Lyrids have a parent and single parents are the rule. For the Lyrids, it’s Comet Thatcher, discovered on April 5, 1861, a week before the start of the Civil War, by amateur astronomer A.E. Thatcher observing from New York City. Later it was found to be linked to the Lyrid meteor shower.