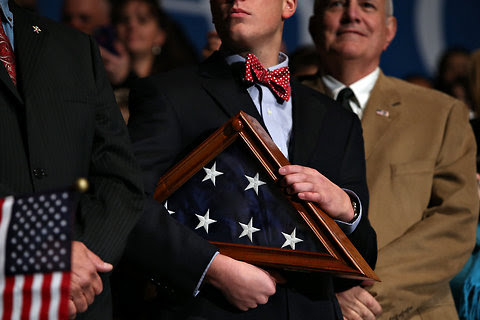 Justin Sullivan/Getty Images
A supporter held a flag that survived the Space Shuttle Challenger crash at a rally for Mitt Romney in Englewood, Colo., on Saturday.

ENGLEWOOD, Colo. — Experienced watchers of Mitt Romney are familiar with an anecdote that he first told earlier this year, about a Boy Scout troop in Monument, Colo., that bought an American flag and then sent it around the country. First they had it flown above the Capitol. Then, they asked NASA if they would send it up into space. The flag went up in the space shuttle Challenger in January 1986, Mr. Romney always tells the crowd, and the Scouts were so excited watching from their classrooms — until the shuttle exploded after liftoff, killing all seven astronauts aboard, including a teacher, Christa McAuliffe.

Somehow, the flag survived the explosion intact, and Mr. Romney tells the story, at event after event in these closing weeks, as a testament to American innovation and perseverance.

But Saturday night in Englewood, about 45 miles north of Monument, Mr. Romney had a surprise for the crowd: The scoutmaster, William Tolbert, a major in the United States Air Force who was assigned to Space Command, was in the crowd, complete with that same flag.
Below, the full exchange: